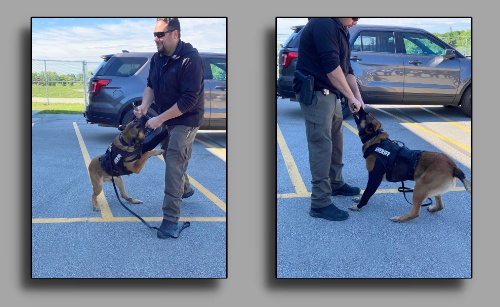 Author Elaine Munsch joins us today to share her experiences at the 2022 Writers’ Police Academy.

Welcome to The Graveyard Shift, Elaine. It’s always a pleasure to have a guest on the site.

I’ll now quickly exit and the floor is yours.

For years my friend Rick McMahan, now a retired ATF agent, has been encouraging me to attend the Writers’ Police Academy (WPA), a conference conceived by Lee Lofland to help writers get the details correct. This year the stars aligned themselves and my daughter and I journeyed to Wisconsin to attend this year’s get-together.

The first event was a firsthand exploration of various vehicles used in police/rescue work.

That  evening we listened to Anne E. Schwartz, author of MONSTER, The True Story of the Jeffrey Dahmer Murders. Schwartz was the first reporter, really just a cub, at the home of Jeffrey Dahmer when the story began to break. She followed the story as the horrific details of what the police found in Dahmer’s apartment became public. Through the years she interviewed Dahmer, finally putting all she learned in a book.

The attendees stayed in Appleton and bussed to Green Bay. The first morning, very early, we arrived at NWTC (Northeast Wisconsin Technical College) for a simulation of an auto collision. We watched as the police arrived and arrested the drunk driver. EMS arrived to tend to the injured driver in the other car. The Fire Department had to extract the other passenger (a dummy), so the firemen cut off the car door. Finally, a helicopter circled the parking lot and landed so the severely injured passenger (dummy) could be taken to a nearby hospital.

All the participants stayed around to answer questions.

We then walked to our classrooms, part of the Public Safety Training Center. In registration we selected various classes of interest: Court Process, Arrest and Booking Process, Armed in America, Firearms, Use of Force Virtual Reality Simulator, Vehicle Extrication, and Tactical Operations – Forced Entry/Room Clearing.

My first class was Court Process where Judge Kevin Rathburn moved us through the A-Z’s of presenting courtroom testimony. I felt like I was back in college, furiously taking notes. At the end of the class, the Judge said he would send via email all the notes we would need.

Then onto Arrest and Booking Process, where the jailer provided a step-by-step guide from the intake at the Sally Port* until the suspect was either turned over for prosecution or released on bond. The minutia of each step examined and explained. The safety of the police, the suspect and the jailers is paramount.

*Per Wikipedia: A sally port is a secure, controlled entry way to an enclosure, e.g., a fortification or prison. The entrance is usually protected by some means, such as a fixed wall on the outside, parallel to the door, which must be circumvented to enter and prevents direct enemy fire from a distance. It may include two sets of doors that can be barred independently to further delay enemy penetration.

My final ‘class’ of the day was Armed in America with Rick McMahan. With over four hundred million weapons in the hands of the American population, and the on-going conversation around gun violence, Rick walked us through the history of firearm legislation, as well as educating us on the different types of weapons out there.

My daughter chose more inter-active classes: Firearms and Forced Entry/Room Clearing. She learned the proper way to hold/fire a weapon and realized that holding a gun with arms extended gets harder the longer you have to maintain that position. Now that she knew how to hold a gun, she and another attendee got to experience how to ‘clear a building.’ Wearing protective gear, they peered around corners looking for the ‘bad guys.’ We’ve all watched this on any number of television shows but to do it yourself is another ballgame. “Look in the corners”.

It was an exhausting day for this old bookseller.

Saturday was another early day. I signed up for Body Cameras, K-9 Operations and finally, Defensive and Arrest Tactics.

The class on body cameras was enlightening and fascinating. The instructor explained what the camera can see and what the police officer sees. With adrenaline pumping, the officer will have tunnel vision rather than the wide-angle of the camera. He showed us various clips of events and then we were able to view what other cameras caught, discussing each video.

Everyone’s favorite class was the K-9 unit. After a classroom session discussing breed choices, training and uses for the canines, we went outside to meet the dogs. Turbo is a German Shepherd and Raven is a Belgium Malinois; those two breeds are the most popular because of their prey drive and their defense drive. The dogs showed their seek-and-find talents. Turbo got the final show: how he would control/contain the ‘bad guy.’

In my final class, the instructors demonstrated how an officer approaches a suspect, beginning with a non-aggressive encounter and working up to the very uncooperative person who ends up on the ground and in cuffs.

Again, my daughter chose the more interactive class: Emergency Vehicle Operations, in other words, she got to drive a police car in pursuit of a getaway car.

All of the instructors were police officers, now instructors at the college but still on the force. 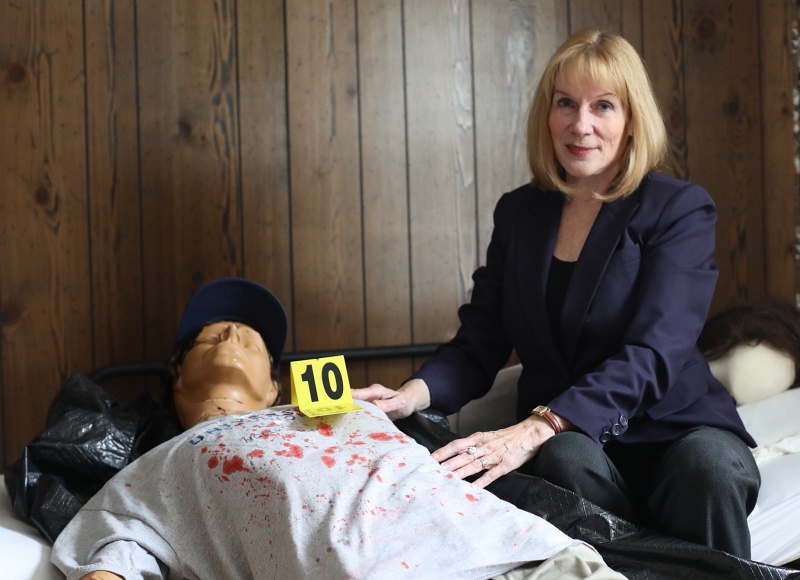 The day ended with a presentation by Dr. Katherine Ramsland. Her expertise lies in the process of interviewing serial killers. She walked us through her relationship with the B.T.K. (Bind, Torture, Kill) killer. 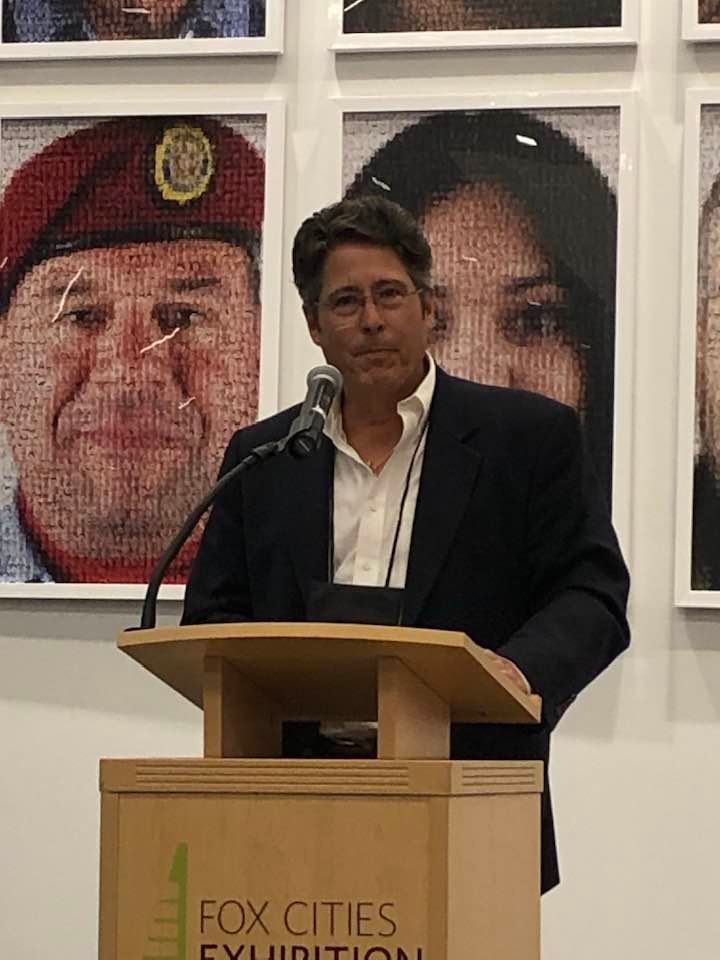 The conference ended with a dinner and a wonderful speech by Robert Dugoni, best-selling author. He discussed trying to find the secret to writing. He started with Stephen King’s ‘telepathy,’ added that Diane Gabaldon’s telling of the ‘magic’ that helps her, and finally Charles Dickins, a.k.a. the man who created Christmas, talking about how he struggled for inspiration and then one night in walked Ebenezer Scrooge.

This was one of the best conferences I ever attended and I would highly recommend it to all writers whether they have police officers in their stories or not. Not only will you be able to correctly portray your LEO characters, but you will also come away with a better appreciation of the difficulties faced by our LEO’s every day on the streets.

Elaine Munsch, who writes under E.M. Munsch, is the author of the Dash Hammond series: THE PRICE OF BEING NEIGHBORLY, THE COST OF KINDNESS, THE EXPENSE OF FAMILY, A WEALTH OF WOMEN and A REASONABLE AMOUNT OF TROUBLE, with more on the way.
She has been a bookseller since 1972, both in Cleveland and Louisville. Elaine moved to Kentucky to open the first Barnes & Noble here. Besides being a member of Sisters in Crime, she also ‘taught’ the mystery genre for the Veritas Society in Louisville, and she facilitates the Mystery Reading Group at the B&N where she’ still working part-time, having retired several times only to come back.
Elaine first published this recap of her Writers’ Police Academy experience in “Derby Rotten Scoundrels,” the blog site of SinC’s Louisville, Kentucky chapter. Both Elaine and her daughter attended the June WPA.
*Derby Rotten Scoundrels – Promote the advancement, recognition, and professional development of women crime writers in the Ohio River Valley region.
July 1, 2022/by Lee Lofland
https://leelofland.com/wp-content/uploads/2022/07/WPA-K-9.jpg 307 500 Lee Lofland https://leelofland.com/wp-content/uploads/2017/04/the-graveyard-shift-1.png Lee Lofland2022-07-01 11:09:482022-07-01 11:09:48Elaine Munsch: An Arresting Visit – The Writer’s Police Academy in Wisconsin