Tag Archive for: officers killed in the line of duty

December 4, 2017 – Officer Kenneth Copeland was shot multiple times during an ambush attack while serving a warrant. He succumbed to his wounds at a local hospital. Officer Copeland is survived by his wife and four children.

December 8, 2017 – Corporal Eric Chapman was killed in a vehicle crash while responding to backup another officer. He is survived by his wife, daughter, three stepchildren, his parents, and two sisters.

December 12, 2017 – Officer Paul Lazinsky suffered a fatal heart attack during a foot pursuit of a criminal suspect, a wanted juvenile.

November 23, 2017 – Trooper Damon Allen was shot and killed while conducting a traffic stop. As he was walking back to his patrol car, the driver stepped out of his vehicle and opened fire with a rifle. The suspect was captured later after engaging in a shootout with other officers. He was shot once in the leg and bitten by a police K-9 during the apprehension.

Trooper Allen is survived by his wife and three children.

November 23, 2017 – Deputy Sheriff Eric Overall was struck and killed by a suspect who was attempting to evade police during a pursuit. Deputy Overall had deployed stop-sticks and was standing well off the roadway when the suspect intentionally drove off the highway to strike the deputy.

November 19, 2017 – Border Patrol Agent Rogelio Martinez was killed while he and his partner were on patrol. While details have not yet been confirmed, some officials believe the two agents were ambushed and bludgeoned, possibly with rocks or other similar items.

Agent Rogelio Martinez  is survived by his fiancee and son.

November 17, 2017 – Officer David Shaw was shot and killed while conducting a traffic stop. He is survived by his parents, brother, and grandmother.

November 16, 2017 – Detective Sean Suiter was shot and killed while attempting to interview a suspect during a homicide investigation. During the encounter, a scuffle ensued and the suspect managed to gain control of Detective Suiter’s service weapon and used it to shoot him in the head.

Detective Suiter is survived by his wife and five children.

November, 5, 2017 – Officer Jaime Cox was killed during a traffic stop when the driver attempted to flee, dragging Officer Cox for two blocks before crashing. Officer Cox was transported to the hospital where he succumbed to his injuries.

November 4, 2017 – Trooper Tom Nipper was killed in a vehicle crash while conducting a traffic stop. He was seated in his patrol car when another vehicle struck his from the rear. He is survived by his wife and three children.

October 30, 2017 – Correctional Officer Wendy Shannon, along with two other prison employees, were killed during an escape attempt by prisoners. During the attempt, inmates used hammers and scissors to attack and kill responding officers.

October 9, 2017 – Officer Floyd East was shot and killed while questioning a narcotics suspect. During the questioning the suspect pulled a .45 caliber pistol and shot Officer East in the back of the head, stole his body cam, and then fled. He was captured a short while later.

Officer East is survived by his wife and two daughters.

October 12, 2017 – Officer Justin Smith was killed during an escape attempt by prisoners. 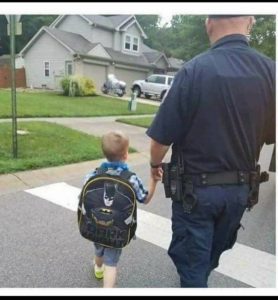 July 5, 2017 – Officer Miosotis Familia was shot and killed by ambush as she sat inside a marked police command vehicle. The shooter walked up to the vehicle and fired through the window, striking Officer Familia in the head. The suspect was killed in a shootout with other officers.

Officer Familia is survived by her three children.

June 30, 2017 – Officer Miguel Moreno was shot and killed as he and his partner approached two suspects who were standing near a car that had been broken into. The shooter immediately opened fire, striking Officer Moreno in the head and his partner in the torso. Despite his wounds, Officer Moreno’s partner pulled his co-worker’s body to safety while returning fire, wounding the shooter.

July 4, 2017 – Officer Robert Johnson was struck and killed by a vehicle while he stood on the side of the road attending to a crash that had already occurred.

June 17, 2017 – Officer Joe William Heddy, Jr. suffered a fatal heart attack after struggling with an inmate who’d tied a bedsheets around his neck during a suicide attempt.

He is survived by his wife, three children, and seven grandchildren.

June 28, 2017 – Trooper Ryan Albin was killed in a vehicle collision while on patrol. His canine, who was also inside the patrol car, was transported to a local vet where the dog was treated for minor injuries.