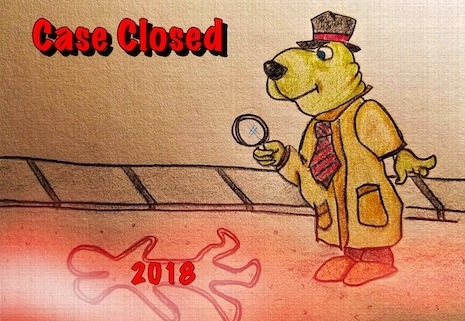 Today marks the end of another year. This one was especially turbulent for me and my family. But above all the bad, of course, came the filling of most of the top portion of a half-empty glass.

As many of you know, both my mother-in-law and our daughter, Ellen, were each diagnosed with serious cancer. They underwent surgeries, a couple each, and they received chemo and radiation.

Our daughter’s primary physician initially mis-diagnosed her troubles, telling her several times during several visits, to deal with the intense pain and other horrible issues, and told her to take Tylenol. He also dismissed obvious signs and symptoms as nothing more than “female problems.” In the meantime, and I won’t go into detail, but she lived a life of crying and moaning while doubled over from excruciating pain, while experiencing an agonizing and extremely anemic hell, for more than a year.

Then, fortunately, she visited a specialist for an entirely different issue. It took him only a minute or two to realize that his patient was in serious trouble and had her rushed to a local hospital for immediate, emergency surgery. Her condition, the troubles dismissed by the original doctor, were life-threatening. Thank goodness the specialist recognized the deadly disease symptoms because we learned that the surgery likely saved her life, that very day.

Then came the cancer diagnosis

During the emergency surgery, doctors discovered the disease, and it didn’t look good. Had the primary care physician performed any sort of typical exam for the type of problem he would have caught the cancer a year earlier. A FULL year sooner.

The oncologist overseeing Ellen’s condition decided to approach with a full-on super-aggressive attack. She wasn’t messing around. Chemo and radiation were started right away and, as a result of the intensity of the regimen, the powerful treatments took a huge toll on Ellen’s body and mind and emotions, as well as ruining her family financially. As a result, they’re struggling to meet even the basic human needs—food, clothing, utilities, and shelter.

Next came the hurricane, a storm that devastated her city and community. Homes just down the road from Ellen’s house were destroyed by wind and water. Fortunately, Ellen’s home is still standing, but it received damage from heavy rains and floodwaters, damage that included ruining their septic system. They now use a pump to drain the bathtub and sinks and there’s a Port-a-John situated at the end of their driveway. This is how a cancer patient, who’s in pain most of the day, must live. Still, her faith is strong and prayer helps her go about her daily life.

Ellen applied for and was denied public assistance. Disability was also denied. In the meantime, Ellen’s husband’s work hours have been cut as result of company shutdowns of related factories. The cost of medication alone is more than their monthly income. The hospital forgives some of the expenses, and many of you contributed to Ellen’s GoFundMe campaign (please click here to contribute), as well as a few of extremely generous private contributions (no amount is too small). But those dollars are gone and bills still arrive and the medication is ongoing, some for life. By the way, Ellen and I are extremely appreciative for your assistance. I’m forever grateful and will never forget it.

My mother-in-law continues regular doses of chemo. Her surgeon and I chatted, in private, immediately after operation and he said her situation was not great. But, what he didn’t know is that, despite her years, Denene’s mom is a strong, independent woman. Cancer and the life-changing, body-altering surgeries were nothing more than a bump in the road for her. She took it all in stride and pushed forward.

Like Ellen, her faith is strong and she relies on prayer to guide her way. Her family is close and devoted to one another.

As soon as she was able Denene’s mother returned to a fairly normal lifestyle, including yard work, hairdresser appointments, shopping trips and, of course, going to church on a regular basis. She drives to her chemo appointments with the company of a friend. She’s tough.

Ellen and my mother-in-law are fighters. They’re strong. And they’re survivors.

At her last scan, my mother-in-law’s results showed her cancer had reduced in size. Still serious, but less of it and what’s there is smaller. They recently  increased the dosage of her ongoing chemo. Hopefully, we’ll soon learn that she, too is cancer free.

Many of you contributed books and other reading material, and gifts, and prayers throughout these ordeals. Those things meant the world to Ellen and my mother-in-law. They helped them escape the world for a little while each day. They’re both avid readers and thoroughly enjoyed the books, and other things. Ellen told me that she often read a book in a single day. The stories took her away from it all for a while.

During all of the above, we, while living in California, we were forced to evacuate our home due to one of the huge wildfires. We watched as the smoke began to rise over the hills in front of our house. A day later ash piled on my vehicle and in the yard and on walkways. The air grew thick and smelled like a water-dampened campfire. Then we saw the sky turn orange and soon the flames reached into the sky above the golden, dry hills.

We loaded our valuables and important papers and fled to an area out of the evacuation zone. A former co-worker of Denene’s owns a very nice condo located in a city near where we lived and she gave us the key and told us to stay as long as we needed. We had no idea if our home would be standing when we returned. Fortunately, it was. The threat of fire continued throughout the entirety of last summer, with many communities near us being totally destroyed. People lost their lives, including firefighters.

Meanwhile, my left hip was hurting, a lot. With each step it felt as if someone jabbed an ice pick into the bone. I visited my doctor who said it was bursitis. No exam, just an opinion. She gave me an injection. I saw no improvement and the pain grew much worse, to the point that I was limping like the Festus character on the old TV western, Gunsmoke.

I convinced my doctor to send me to a specialist who ordered x-rays. Again, a diagnosis of, “I don’t see anything work. Take Ibuprofen. It’ll pass.”

Well, it became far worse. I didn’t want to walk because it hurt so bad. Another doctor visit. No luck. Another x-ray. Nothing wrong, they said.

Then we moved to Delaware. Another extremely stressful point in our already turbulent lives. We moved to be closer to our family.

As soon as our health insurance went into effect I visited a nurse practitioner at the University of Delaware. She ordered x-rays and, wait for it, she learned that there’s absolutely no cartilage in my hip joint. It’s bone on bone with three bone spurs wedged between. She said she couldn’t imagine me dealing for so long with the pain this caused. She sent me to a hip specialist. He agreed. A total hip replacement was the only solution

My surgery is scheduled for this Thursday, January 3rd. Again, no cartilage in the joint. It was impossible for even a non medical person to look at the x-rays and not see this. But that’s the care we received from Kaiser Permanente in California. I must say, it was the worst I’ve ever seen. Denene, too, and she’d know since she been in the medical field her entire adult life, including managing hospital labs, teaching at medical universities, contributing to medical textbooks, and running clinical trials for drugs she and her teams developed that are now on the market.

As a result of our move to Delaware, Denene left a job she absolutely loved. So switching was a difficult choice to make. And there was the whole moving thing where it’s inevitable that belongings are lost or destroyed. Along with a move comes the stress of finding a house to purchase, selling the old home, and so on. We were lucky to have sold our sold our California home extremely quick and I credit that to a wonderful and extremely efficient Realtor, Phyllis Ballew, with Berkshire Hathaway. We found a really nice home here in Delaware, a place that’s in a state of chaos right now due to a large remodel project that includes a complete custom master bathroom re-do.

The contractor we selected for the bathroom job, after a serious search (we’re picky), is Delaware contractor R.A. (Ron) Barker. He and his crew are wonderfully meticulous down to the finest detail. Since I’m just hours away from hip surgery, having a new bathroom is essential. I think they’ll have it completed just in time. It’s a large space that required a ton of work and they’ve gone above and beyond to accommodate us. The room isn’t finished but already looks amazing.

Since I’m barely able to walk from one room to the other (I rely on a can I’ve named Virgil. Get it? Virgil Cane?) it’s practically killing me to not do some of the work myself. But it is what it is.

I’ve shared all of this to express my deepest gratitude to each of you for the support you’ve shown for me and my family over the past several months. It’s been a tough year and I don’t know what we’d have done without your generosity and kindness. Believe me, I cherish your friendship.

You guys are the best and wish you all an extremely Happy New Year.

Again, thank you from the bottom of my heart!