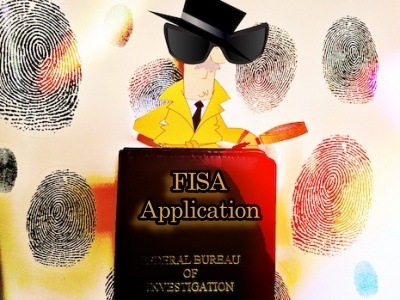 In 1978, congress approved and enacted the Foreign Intelligence Surveillance Act (FISA). In addition, the Foreign Intelligence Surveillance Court was established to review applications submitted by the federal government regarding electronic surveillance (phone and wiretaps, etc.), physical searches, and other investigative needs pertaining to foreign intelligence. The applications to the court and their subsequent review and rulings are entirely one-sided (only the government may provide/offer evidence) and are conducted in secret.

Applications must be filed, at minimum, seven days prior to the time the government desires to have the matter reviewed by the court. Emergency situations are the exception to the seven day rule. It is the Clerk of the FISA Court who receives the filings, not the judges.

Only one judge sits on the court at a time, in rotating seven-day shifts. Therefore, FISA applications are heard by a single judge, not a panel of judges.

It would not be unusual for the entire process to be handled electronically and/or by phone. In past years it was extremely rare that a FISA Court judge denied an application.

The Foreign Intelligence Surveillance Court consists of eleven district judges chosen by the Chief Justice of the United States. Each FISA Court judge serves for a maximum of seven years. Their times on the bench are staggered to ensure uninterrupted continuity. Judges are selected from at least seven of the circuits across the U.S. At least three of the eleven judges must live within twenty miles of Washington D.C.

The Foreign Intelligence Surveillance Court sits in a $2 million courtroom in the federal courthouse in Washington, D.C.

The entire FISA application process is an interactive one, with the Court assigning a legal team to meet with government officials. Together they address issues and/or legal concerns. The Court’s staff may suggest the addition or omission of information to or from the application.

As a result of its secret nature due to the need to protect classified national security information, many today believe the Court “rubber-stamps” anything and everything that comes before it. Because the public generally hears of only the approved applications with high-profile outcomes and not those that were denied, there’s often a feeling that no real checks and balances are in place.

To the contrary, though, in 2017, for example, the FISA court did indeed reject twenty-six applications. In the same year they denied parts of fifty applications and modified 391 others sought by the government. 1,147 applications were approved without modifications of any kind. So not quite a rubber-stamping. Close, but not quite. It does make a difference when the Court works with the government in order to gain an approval.

Should an application be denied by the FISA “judge of the week,” the government may not “judge shop” by seeking approval from one of the other sitting FISA Court judges. Instead, if still wanting to move forward, the applicant must submit an appeal to the Foreign Intelligence Surveillance Court of Review.

Again, speaking of rejected applications, instead of denying them due to “problems,” a FISA Court judge sometimes opts to to allow applicants to revise their submissions, or to totally withdraw and resubmit with the information the court feels it needs in order grant an approval. It’s sort of like a school teacher helping a student achieve an “A” on a test by supplying the correct answers.

*This article contains just a brief nibble into the inner workings of the FISA Court. Trust me, one could spend days studying what they do and why they do what they do. It’s confusing to say the least. But one things is certain, if the the government “wants you” they’re gonna get you.

By the way, please do not interpret this post as one of a political nature. I do NOT discuss politics or offer opinions about politics or politicians. That’s a big NO, NO, and NO! Please save those discussions for other sites.

Thanks, and I hope your holidays are as happy as possible. So far ours have been quite pleasant.