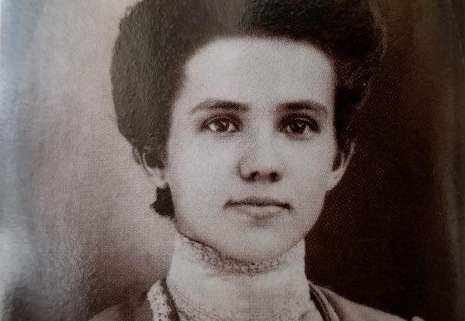 Because the office of sheriff was left vacant, a special election was quickly scheduled to fill the position. Sheriff Talbott’s wife, Minnie Mae Talbott (pictured above), tossed her hat in the ring, which was unheard of at the time for a women to even remotely think she could win an election. But Minnie Mae was determined.

Twenty-five days after the three lawmen were gunned down in the line of duty, on May 29th, 1919, Minnie Mae Talbott won the office once held by her husband (by over 700 votes) and was officially sworn into office on June 8th 1919.

Minnie Mae Talbott was the first woman elected to the office of Sheriff in the United States. Just as remarkable, she was elected to office by an all-male electorate.  After all, women would not gain the right to vote until August 1920.

Sheriff Talbott and her five children resided in the jail complex where she often took it upon herself to prepare meals for the prisoners housed there. She did what she could, running the jail on a budget of a mere $80 mer month.

Sheriff Minnie Mae Talbott earned a groundbreaking spot in the history books. She served as Lafayette County, Missouri’s 16th sheriff, an office she held for only two years. She decided not to run in the next election due to her declining health. Therefore, she moved to Colorado, hoping the change would aid in her battle against consumption. She remarried there and and remained in Colorado until her death in 1962.

On August 14, 1936, just before 5:30 a.m., Rainey Bethea was led to the gallows in Owensboro, Kentucky. He’d been convicted of robbing, raping and murdering 70-year old Lischia Edwards.

News of Bethea’s public hanging, the last in the U.S., reached from coast to cost. The news was especially hot because the sheriff in the area, the official charged with carrying out the execution, was a woman—Sheriff Florence Shoemaker Thompson.

Sheriff Florence Thompson, a mother of four, was appointed to her position when her husband, Joseph Everett Thompson, the current sheriff, died of pneumonia. The local judge needed to move quickly to appoint a new sheriff to succeed Everett Thompson and his wife Florence was the logical choice for the job. This was so due to a practice at the time called “widow’s succession,” where a politician who died in office was succeeded in office by his widow.

Not one who favored wearing a uniform, Sheriff Florence Thompson often wore dresses while at work. To make her position noted, though, she pinned the sheriff’s star to her dress for all to see.

On the day of Bethea’s hanging, a mere four months after Thompson took office, a crowd of 20,000 people gathered to see the county’s female sheriff pull the lever to send the condemned man to his death. But she did not, opting to hand over the job to a former police officer who showed up in an extremely intoxicated state and practically botched the execution.

Journalists went nuts, ridiculing the sheriff for not having the guts to carry out the execution. One newspaper even falsely reported that the sheriff had fainted at the time the of the execution (yes, fake news existed in those days as well).

Thompson was re-elected in November of 1936 when she received 9,811 votes. The two who ran against her split a mere 3 votes between them. Obviously Sheriff Thompson was a popular woman. She served until 1938 when she decided to leave office. However, she was immediately appointed as a deputy by her successor.