RILEY TOWNSHIP, Mich. – A 73-year-old woman was in her kitchen doing what everyone does in their kitchen—cooking, cleaning, eating, washing dishes, hanging out, having coffee, etc. You know, “kitchen things.” Her husband was nearby.

The woman’s husband says he heard a loud “crack” and suddenly his wonderful wife of many years collapsed to the floor. She was dead.

The sharp sound was gunfire. The woman had been shot to death by a neighbor who was target practicing on his property, firing at a dirt berm.

Apparently, at least one of the shooter’s rounds missed its mark and traveled through the air, across his property and then across his neighbor’s land, through their walls, into their kitchen, where it came to rest inside the body of an elderly woman who was doing nothing more than enjoying a day at home with her husband. Now she’s gone, forever.

Police say the shooter is cooperating with authorities.

I bring up this tragedy because, first, it’s horrible, and next it reminds me of an incident that occurred just last year in the state of North Carolina. Onslow County, North Carolina, to be exact, and it involves my daughter, her family, their home, their neighbors, and me, in a roundabout way.

Our daughter’s home was struck by gunfire.

The initial round broke a window and penetrated an interior wall of a laundry room.

Thinking it may have been a freak accident, the window was replaced and all was well … for a short while. Then more sounds of gunfire were heard in the area, and those gunshots sounded extremely close with additional rounds striking the house. One lodged in the wood trim next to the front door.

The front door. The door most often used by my daughter, her husband, and our grandson, Tyler. The round hit less than a foot to the right of where a person would stand when unlocking the door, turning the knob to go inside, or to stand watching as Tyler’s school bus arrived, something Ellen liked to do until cancer arrived and made it too difficult for her to enjoy many of the things she enjoyed.

Ellen, our daughter, called the sheriff’s office to report that someone was shooting at her house. In the meantime, she contacted a next-door neighbor who also discovered rounds lodged in the exterior of their home. Also near the front door.

Here’s how the sheriff’s office responded to someone firing live rounds into the homes of human beings.

This is the point where I totally and absolutely lost it

One official wrote me to say, “Not sure why you think we did not respond…..?”

Well, maybe it’s because NO ONE RESPONDED!!

In fairness, I feel sort of confident the official was relying on the “word” of the deputy who reported that he’d handled the incident. But …

Finally, it comes out, sort of …

The deputy who was assigned the original call, four days earlier, told his boss that he’d been too busy that day to actually show up. Instead, he claimed he’d tried several times to call Ellen on the phone, using his cell phone, and that he left messages on her voicemail. There are no such records. They do not exist. No one called.

Next, I was told that the sheriff’s office has records of all calls made by the deputy. However, they could not produce them when I requested them (I knew they didn’t exist).

Sheriff’s officials again claimed Ellen did not call, asking me, “What is the address? Is your daughter a minor? Who are you calling when you call?”

Keep in mind, the person who asked these questions was the same person I’d spoken with about the issue. The same person who took the information from me—name, address, phone number, nature of complaint— after the sheriff had him contact me. AFTER the deputy said he’d been too busy to respond to the call made by Ellen. After Ellen called several times. After neighbors called.

It was within the same written message to me, the official made the “Not sure why you think we did not respond…..?” statement. Just seconds earlier, remember, he/she claimed Ellen had not called. Why would someone respond to a call that hadn’t happened? Curious, I know. 🙂

But … if there was a record of Ellen calling, why did they not know her name, address, age, the number she called? Puhleeze. I made up better excuses when I didn’t do my homework in elementary school. Anyway …

Convoluted, huh? But wait, it gets better!

Okay, back to the deputy. The major sent him out to speak with the shooters (by this time, everyone knew who was pulling the trigger) but he opted to merely drive by—he didn’t stop—reporting that the activity had ceased—he didn’t hear gunfire as he drove through the area (like people shoot nonstop, without eating, drinking, tending to needs, and /or sleeping, 24/7).

Anyway, the deputy finally showed up at Ellen’s house four days after her initial call to the sheriff’s office. While there, like in a Perry Mason episode, he used a knife to dig the rounds from the house.

Fortunately, this shooter used common sense and realized the danger and agreed to not shoot until he erected a dirt berm. Now, after hearing the tragic details from the Michigan shooting, we all know just how safe/unsafe a dirt berm can be. There’s a dead woman and her grieving husband who are proof that these berms are sometimes not safe, especially in a residential area.

I recall a well-known author posting about a similar experience in her super-nice neighborhood, and that guy was firing a fully-automatic weapon.

By the way, on the day the deputy finally spoke with Ellen and then visited the shooter, someone else from the sheriff’s office contacted me to say the matter had been resolved (case closed) several days earlier to everyone’s satisfaction. The message was extremely defensive, taking the side of a deputy without knowing the circumstances at all. No clue, but was quick to discount me, Ellen, and the shooting—case closed. This person was in no way involved in this mess, but she/he saw the correspondence and felt the need to chime in, without knowing a single detail. Not one. Four days after the fact while the situation was still fully in play.

Today, the shooting continues, with a dirt berm in place.

In the midst of all the buck-passing and possible fibbing and defensiveness of a deputy who was possibly a bit less than honest, I wrote this to the sheriff’s office command – “I know it’s none of my business how you conduct the business of your office, but this, trying to cover up after-the-fact, is part of the reason the public distrusts the police. I’ve devoted the past ten years of my life educating the public about police and that we really are the good guys and that they can trust us, and then all it takes is a few words to tear down the little progress we make. My blog alone has reached appr. 4 million people worldwide and it’s a battle each day to present positive information that’ll help build that bridge between the public and the police.”

Note – It’s a crying shame it took so long and to have so many people involved to stop a life-threatening situation. I sincerely appreciate that the top brass within the sheriff’s office handled this for me, but three or four days of someone shooting at your house before a patrol deputy could find time in his schedule to stop a potential death by shooting is, well, it’s beyond me. And why did I have to pull the “I was a cop card” before anything at all was done? Would they have eventually shown up had I not contacted the sheriff to mention I was a former detective who’s investigated more shootings into occupied dwellings than I could possibly begin to count? It’s illegal to do so, by the way.

I don’t know the answers to those questions, but I do know that 500 feet is not ample distance to completely prevent injury or death from a high-powered rifle round. Nor is it possible for improperly constructed dirt berms to stop rounds if the berms are too short, too narrow, or too thin. Even rocks or pieces of metal on dirt berms can cause ricochets, or lead to break apart sending shrapnel off in various directions. By the way, shrapnel is a fancy name for smaller projectiles that could also be as deadly as an intact round. 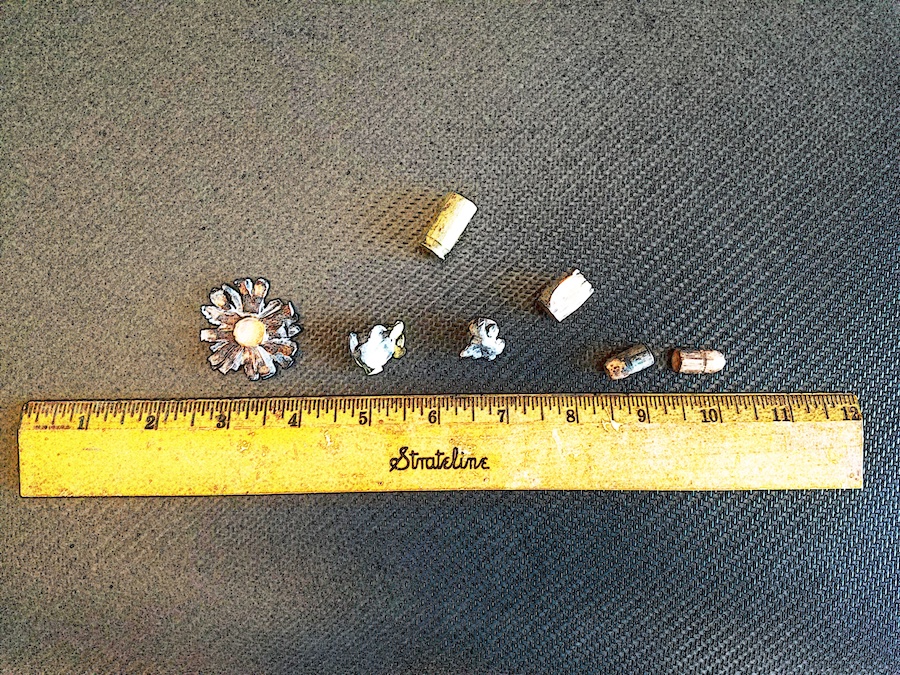 The rounds above each struck a hard surface before coming to rest. The item at the top is ejected brass from a .45.

Commonsense. Sometimes that’s all it takes to save a life. That, and not shooting toward homes.

Again, if you can help, please do. Contact me at lofland32@msn.com for contribution details. Thank you so much!