Have you hear the rumor? You know the one, that some people are simply not wired to be cops.Shocking, isn’t it?

There, I’ve said it. And and I’m not spreading gossip because, sadly, it’s true.

Ask any police officer and they’ll tell you that it takes a special kind of person to successfully wear a gun and badge, and to live and work in a manner that coincides with their sworn oath.

Sure, “law dawgs” come in all shapes, sizes, skin colors, and from varying backgrounds. But there was one officer who, for numerous reasons, shouldn’t have made it past the interview stage, let alone advance to actually working the streets. This pint-sized, woefully inadequate cop was quickly nicknamed “The Little Cop Who Couldn’t.”

Before I delve into the tale of the cop who had to sit on a pillow to see above the steering wheel in their patrol car, we need to assign a name to the officer—a gender-neutral name to protect the identity of the thumbnail version of a real police officer. By doing so, it’ll allow you to paint your own mental picture of him/her. The name I choose is Pat (could go either way with this one – remember Pat on SNL?).

Pat was a unique police officer who stood at a towering 4’10” tall, with shoes on. Not a single supply company stocked police uniforms in toddler sizes, so Pat’s clothing had to be specially made and ordered from a company located in a remote corner of None Such County.

Even then, with None Such’s finest clothing maker assigned to the task, a good bit of onsite tailoring was required, snipping here and stitching there, to insure a proper fit. To provide a better picture of the size of this person, had someone bronzed Pat’s Bates work footwear they’d have looked a lot like “baby’s first shoes.” 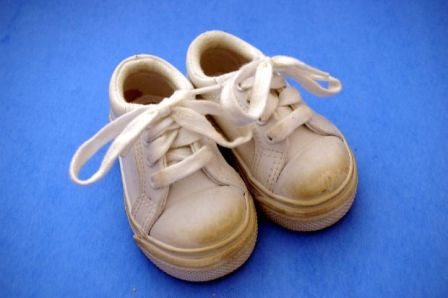 During basic training, one of the practical exercises for the class was to direct traffic at a busy city intersection. Trainees were required to be in full uniform for the exercise, including hats. Well, they just don’t make police hats that small, so Pat borrowed one from a fellow classmate.

The hat was the thing that sent the rest the class over the edge. The minuscule officer looked like a kid playing dress-up in adult clothing. 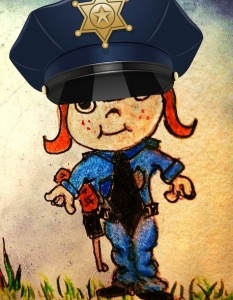 Not the actual Pat.

We each took a turn in the intersection, stopping traffic  to permit left turns, right turns, and allowing cars to travel forward. We repeated the process until our instructor felt comfortable with our ability to control traffic flow.

Then it was Pat’s turn. So the recruit in the intersection, a full-sized officer, successfully stopped traffic in all four directions to allow Pat to assume the position in the middle of the street.

Then, with arms outstretched and a short blast from a whistle, Pat then sharply and crisply motioned for one lane of traffic to move forward. And, for a brief moment, all was going well until Pat gave the whistle another tweet to stop the oncoming traffic and then turned to the left to start the next lane of traffic moving. Well, Pat’s cantaloupe-size head turned left, rotating inside the big-man-size cap. But, instead of moving in sync with the turning head, the too-large hat remained facing forward. The entire class erupted in laughter, as did many of the drivers who were absolutely confused about what they should do next.

Our instructor rushed out into the ensuing traffic jam to straighten out the mess and calm the drivers who used their car horns to blast their displeasure. Pat, in a moment of self-induced blindness because the hat had slipped even further down the face, totally blocking any hope of seeing, well, anything. Unfortunately, during the melee Pat dropped the whistle onto the pavement and when attempting to retrieve it, lost the hat. Of course the swift evening wind gusts sent it rolling into the lines of moving cars and trucks.

Pat once responded to a shoplifting call—an 11-year-old girl swiped a candy bar from a local K-Mart—and just as Pat was about to enter the store the little kid ran outside. Pat grabbed the little darlin’ who then pushed Pat down to the pavement. Pat got up and grabbed the 70-ish-pound kid and it was on.

According to bystanders, who, by the way, called 911 to report an officer needing assistance, said the child was absolutely beating the tar out of Pat. One witness told responding officers that Pat closely resembled one of those blow-up clown punching bags that pops back upright after each blow.

Then there was the time when Pat’s fellow officers had responded to a large fight outside a local bar. The dispatcher cautioned that weapons were involved and that several people were already injured and down. Pat was in the middle of answering a domestic he-said/she-said when the call came in.

When officers responding to the brawl saw the massive crowd they immediately called for backup, which, at that point, meant calling in sheriff’s deputies and state troopers since every available officer, except Pat, was already on the scene. The fight was a tough battle and officers and bad guys were basically going at it, toe-to-toe and blow-for-blow. Officers were outnumbered 4-to-1, at least.

Pat didn’t bother stopping at the curb. Instead, the teeny-tiny officer who, if you recall, had to sit on a pillow to see over the steering wheel (no, I’m not kidding), pulled the car directly into the parking lot beside the action, flung open the car door, and stepped out. Well, sort of.

Pat’s pistol somehow had become entangled in the seat belt, which sort of reeled Pat back into the car like a Yo-Yo on the upswing. Pat’s Maglite hit the pavement, coming apart and spilling batteries in all sorts of directions. The pillow fell out of the car and slid beneath the vehicle. And the hat … Pat had donned the cop/bus driver hat, which, of course remained motionless while Pat’s head spun around like a lighthouse beacon as he/she surveyed the scene.

By the way, Pat’s hands were so small that the department had to purchase a pistol that’s a bit smaller than standard cop issue. However, Pat’s index finger was still too short to reach the trigger. So he/she learned to shoot using his/her middle finger when firing the sidearm. Didn’t matter, because Pat failed to shoot a satisfactory score during the first annual weapons qualification.

So, I guess the true test of becoming a police officer is not how strong the desire or how big the heart, it’s how well the head fits the hat. And, of course, you must be “this tall” to drive a police car. 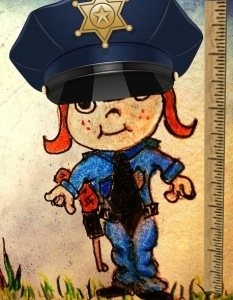