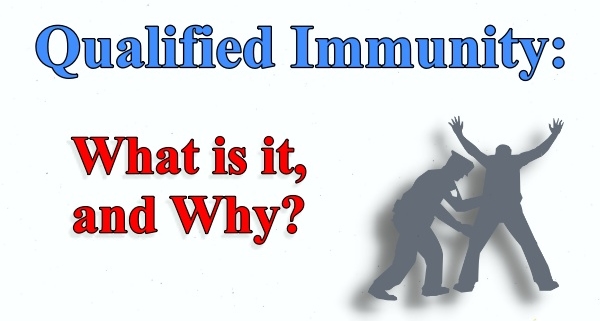 In the case of Harlow v. Fitzgerald, the U.S. Supreme Court recognized the need for a qualified immunity defense to protect government officials, including police officers, from frivolous lawsuits that often stem from their official actions. However, the Court also made it perfectly clear that the vast majority of government officials, again, including police officers, are not entitled to absolute immunity. That privilege is solely reserved for a select few officials at the top of the food chain.

Qualified immunity lawsuits may proceed only when an individual’s “clearly established” statutory or constitutional rights have been violated.

When examining cases of qualified immunity, courts consider if a reasonable government official or police officer knew that their actions violated the rights of the plaintiff. Another factor considered by the court is if the law in question was in effect at the time of the alleged violation of a right(s). Of course, if the law is the same at both times, then that is the law that’s considered when determining an outcome.

The “reasonableness” of a particular use of force must be judged from the perspective of a reasonable officer on the scene, not in hindsight.

Police officers can act without fear of being sued as long as their conduct does not violate the victim’s constitutional rights. However, those rights must be so clearly established and apparent that a reasonable person would have known them. This is the intended purpose of Qualified Immunity.

An example of qualified immunity is when an officer reasonably but mistakenly concludes that probable cause exists, or when they reasonably believe that their action was constitutional.

Officer Real Lee Honest passed by a liquor store while walking his beat. He saw a man behind the counter holding the store clerk in a chokehold. The two men stood near the cash register. Officer Honest, believing the man was robbing the clerk, immediately called for back and then entered the store with his pistol in hand, aimed at the “robber.” The officer shouted for the robber to release the clerk and to lie flat on the floor. The man complied while loudly proclaiming innocence but allowed the officer to apply handcuffs to his wrists.

Lots of shouting between the officer and the suspect. The store clerk was also shouting something, but the officer whose adrenaline was in “Danger/Robber-in-Progress” mode was unable to process the words of the clerk due to auditory exclusion. His attention was on the “robber” and, of course a safe outcome of the situation.

As it turned out, the “robber” was a MMA fighter called “Snake” who trained with his best friend, the store clerk, and he was merely demonstrating a technique to his pal.

Snake felt his rights had been violated and he hired an attorney to sue the officer. The court, though, ruled that the officer acted in good faith and that no reasonable person would have thought the officer’s action were unconstitutional. An honest and reasonable mistake. Qualified immunity applies.

In the case of Derek Chauvin, the former police officer charged with the killing of George Floyd, the victim’s family may have a difficult time proving their civil case against the officer due to qualified immunity. To prevail, they must cite precedents in which past defendants were found to have violated the law in exactly the same manner as the violations committed by Chauvin.

The split second decision of protecting their lives or the lives of others should not hinge on the worry of losing everything they own in a civil lawsuit. Instead, their sole worry when in a life or death situation, should be on living to see another day. Still, the decision must be one that’s reasonable and does not violate constitutional rights.