I’m the old guy at the end of the street. The Grumpy Gus who doesn’t want kids in his yard. In fact, I don’t want to hear their squeals and the squalls or their giggles and games. I don’t want to see their toy cars and trucks, their skateboards, basketballs, and pigtails and buzzcuts. None of it. I do not want them in my yard. Nor do I want them in my driveway scrawling cutesy multi-colored chalk pictures across the concrete. I don’t even want them playing in front of my house. 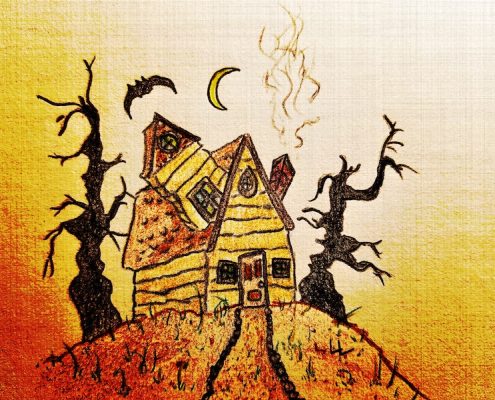 The neighbors talk. They don’t like me because I don’t step outside to chat when they pass by while walking their four-legged pee and crap machines who leave little “bundles of joy” on my property, offensive “stuff” I have to scoop up. I know they leave it on purpose.

The people who live on my street, the adults, think I’m odd. Crazy, some say. They point and they whisper when they see me rolling my garbage cans to the curb each Tuesday evening.

The children won’t stop coming into my yard. They enjoy taunting me. They’re bullies, but in miniature size. They toss my landscaping rocks out into the street and they uproot the accent lighting around my trees and shrubs. They write on my sidewalk and they spray-paint the sides of my car. They’ve scratched both car doors, using a nail or something of the sort, and they steal mail from the mailbox and then scatter it along the street.

I used to like kids. Really, I did. All ages and sizes too. I adored their precious little smiles and their innocent questions and nonstop chatter. I enjoyed watching them play. They made me smile. The sounds of their giggles and yowls and shrieks were like music to my ears.

My house, in fact, was once the hub of activity for the neighborhood kids. They came to play with my two children, Seth and Sarah. They’re both grown now, though, with kids of their own, and they moved away many years ago, long before my current neighbors moved in. I’m the last of the original homeowners in my development.

My new neighbors are strangers. They don’t know a single thing about me. They didn’t know me back when I was still in uniform patrolling the interstate highways and county roads. They didn’t know me on the day when I was stabbed three times—one wound to the head, one in the hand, and the other in my right shoulder. They weren’t around when the house on Maple was fully engulfed in flames and I went in and pulled out the old man trapped inside. Sure, I lost some hair and earned a couple of nasty burns, but the gentleman survived and he stops by to see me once in a while.

My neighbors …. well, they don’t know about the incident that started the “kids in the yard” thing.

It was a Wednesday night. My report indicated the the weather was clear, but no moonlight. Road conditions were also clear, and dry. No obstructions. Nothing, including skid marks. There were none.

When I arrived, a citizen was standing by. She’d called it in. Had to drive to a nearby country store to use the payphone hanging on the wall outside, next to the Coke machine. I’d passed by it a million times.

The car was fully engulfed in flames.

The driver was obviously deceased. The woman on the passenger side, well, her head was missing. I later found it lying in the ditch, staring up at me after I pulled a stand of weeds to the side to better see the object hidden at their base.

Three children occupied the backseat. We didn’t know this until after the firefighters extinguished the blaze.

I only knew about one of the rear seat occupants—a little girl. The medical examiner later told me she was seven-years-old. Hers was the only face I could see through the boiling black smoke and yellow-orange fire with heat was so intense it burned my eyebrows and the hair on my arms before I ever reached the car.

Fifteen feet. That’s as close as I could get without being severely burned.

But she was screaming. “Help me, please!” 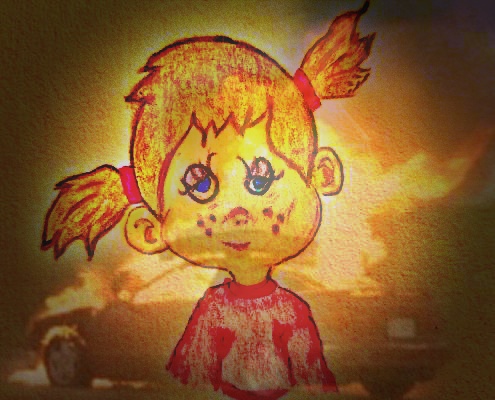 Her sweet face was knotted in agony. Her eyes … I’ve read it in books before, “Her eyes pleaded with him,” but I never truly grasped what those authors had in mind when they penned the words … until I stood helpless before a girl whose tiny doe eyes pleaded with me to rescue her from the hell she was experiencing.

Tires deflated and dissolved. Paint bubbled like hot tar. The asphalt beneath the burning car melted like butter dancing and sizzling in a hot skillet. Glass shattered. Flames crackled and buzzed and things inside the car popped and fizzed and banged and settled. Car seats burned like fireplace logs. In the middle of of all of this sat the little girl, clawing at the scorching-hot metal car door.

I pushed through the heat and smoke and I tried to grab the child. I tried to open the door but  it was like grabbing molten lava. I reached for her and she for me. But …

And then she was calm, and the screaming stopped.

Her pitiful cries for help still haunt me to this day.

So does the fact that I failed to save her.

It’s not that I don’t like kids. I love them. I really do.

I just can’t take the sounds they make, or seeing their happy faces.

They remind me that I failed that little seven-year-old child.

I see it every time one of those kids comes into my yard, or when they play in the street in front of my house.

So that’s why I’m the old guy at the end of the street. 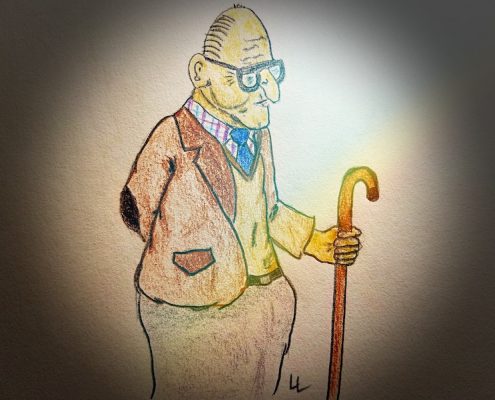 *This tale is based on a ton of fact, but presented in a fictional sort of way. Yes, it’s most definitely true, but it’s about a lot of people, not just Grumpy Gus.

Gus, by the way, is very close to me. Extremely close …