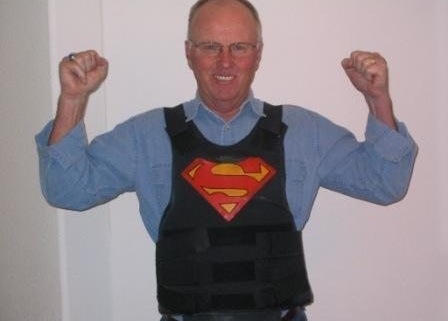 Body armor has come a long way from heavy suits of armor or stylish outfits made from clunky chainmail. Of course, those types of protection served their wearers well against attacks by people swinging swords and axes, but today’s major threat is that of gunfire. Therefore, ballistic vests are the preferred option for law enforcement officers to wear as protection against incoming rounds of ammunition. Besides, getting in and out of a patrol car would be extremely difficult while wearing a steel suit.

Before continuing, we should first clarify that the vests worn by law enforcement officers are NOT totally bulletproof. Not at all. Every single vest can be penetrated by high-powered ammo. In fact, repeated rounds fired into the vest from nearly every type of firearm could eventually break through the material. Therefore, writers, the correct terminology when writing about an officer’s protective armor is “bullet-resistant vest,” not a bulletproof vest.”

There are various types of vests that offer varying levels of protection. The most common level of protection is found in Types II through III-A, the vests typically worn by patrol officers. These are the vests that are commonly worn beneath a uniform shirt. Look closely and you’ll easily see the outline of the vest beneath an officer’s shirt.

The outer front and back coverings of a bullet-resistant vest is called a “carrier.” It serves to contain the protective panels meant to stop bullets from striking the officer’s flesh. Carriers are made from heavy-duty material that can withstand daily use. Some carriers are made from lighter-weight materials/fabrics such as CoolMAX®, Cordura® or Gore-Tex®.

The front and back carrier-covered panels are fastened to the officer’s body by securing Velcro straps tightly in place, over the shoulders and around the torso. 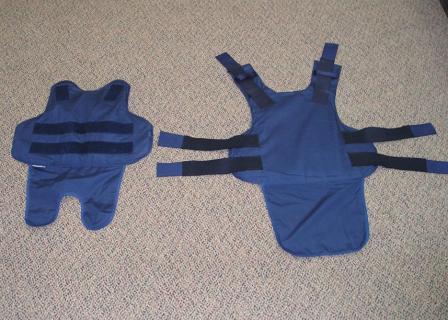 Front and rear sections of an officer’s vest. Desgned to be worn under the officer’s uniform. Vests are custom-fitted for each officer. The outer blue cover, the carrier, is not made of Kevlar®. It’s also removable from the panel to enable washing. Panels must be cleaned by wiping with a damp cloth and mild detergent. Submerging a Kevlar® panel in water greatly decreases the stopping power of the vest.

Pockets are sewn into carriers for the purpose of inserting and holding the removable protective panels. Without the panels the carrier is simply a thin vest similar to those worn by workers/clerks in big box stores.

Above left is the front panel for a male officer. The portion below the two horizontal Velcro straps is meant to be tucked into the pants just as one would tuck in a shirt tail. The rear panel at the right has a long “tail” that’s also tucked in the pants. The cut-out section in the front panel serves an important purpose. I’ll leave it to your imaginations as to why it’s there. Remember, this vest is designed to be worn by a male officer.

Kevlar® was first developed in the 1930’s by DuPont™ chemist Stephanie Kwolek. Four decades later Kevlar®was used as a replacement for steel in racing tires. It’s now used in passenger car tires as well. In fact, I recently replaced a set on my personal vehicle.

“Aramids” are made by a reaction among an amine assembly and a carboxylic group, which generates an AABB polymer. This is liquid chemical blend is then transformed into a solid form by spinning it together with sulfuric acid. When the spun mix is cooled it can then be made into a fiber, powder, or pulp. It is the result of this process that allows manufacturers to mold the pulp, fiber, and powder into panels used for flexible and lightweight protective vests worn by officers.

In 1995,Kevlar®® Correctional was introduced as a vest/body armor that could stop attacks from knives and other edged weapons This development was a huge breakthrough since corrections officers are most often subject to attacks by edged weapons, yet sometimes encounter attacks by gunfire.

Vest types I through III-A are capable of stopping rounds fired from small to medium caliber handguns.

Type III and IV panels are capable of stopping high-velocity rifle rounds, such as .223 and .308 rifle rounds. These are the clunkier, bulkier vests seen worn on the outside of SWAT and special ops officers’ uniforms. They’re also worn over the uniform shirts of patrol officers who find themselves engaged in special circumstances, such as an active shooter or sniper/ambush situation. 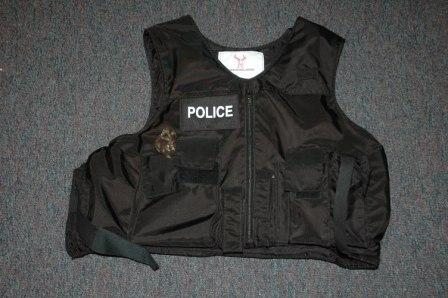 Kevlar® by DuPont is probably the most widely known brand of brand of bullet-stopping para-aramid material (threads). Keep in mind, though, when including bullet-resistant vests in your tales, bullets do not bounce or ricochet off the vest. Instead, the material (Kevlar® or other brand) grabs the bullet and contains it within its tightly-woven layers.

These vests, because of their flexibility, are known as “soft vests.” They’re pliable and somewhat bendable. Each vest should be custom tailored to the individual officer. Men and women obviously have different sizing needs. Vests worn by female officers are designed to accommodate their body shapes.

Soft body armor is basically meant to prevent penetration from handgun rounds. For added protection, metallic or ceramic ballistic trauma plates can be inserted into small pockets in the front and back of a vest. These plates help protect vital organs against rounds fired from rifles and some higher-powered handguns. 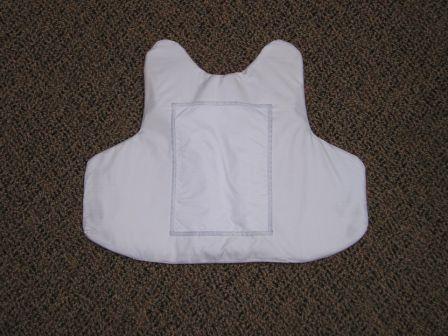 Front Kevlar® panel with rectangular pouch for ceramic or steel trauma plate. Front and rear panels are inserted into a carrier.

The National Institute of Justice (NIJ) sets the standards for body armor manufacturers. Those standards include the following protection levels: 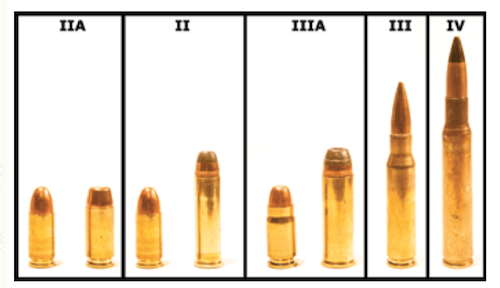 From the National Institute of Justice:

NIJ has been setting voluntary body armor standards since 1972. The NIJ standard is the only nationally accepted standard for the body armor worn by law enforcement and corrections officers. NIJ also administers a program to test commercially available armor for compliance with the standards to determine whether the vests meet NIJ’s minimum performance standards.

The NIJ ballistic resistance standard classifies body armor by levels of ballistic performance. For any performance level, NIJ’s test protocol requires that the bullet does not perforate the vest and that the vest protects against blunt trauma.

NIJ’s stab resistance body armor standard specifies the minimum performance requirements for body armor to protect the torso against slashes and stabs from knives and spikes; it also describes the associated testing procedures. The standard includes three performance levels, which are based on the armor’s ability to prevent a perforation deep enough to injure an officer’s internal organs at different strike force speeds. The standard also includes two protection classes: one for high-quality, commercially produced knives and another for lower-quality knife blades and improvised spikes that are likely to be present in a corrections environment.

A few companies other than Kevlar® also manufacture bullet-resistant vests.