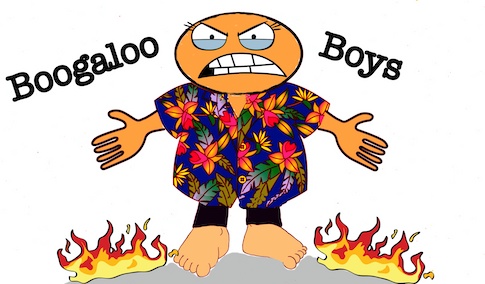 Boogaloo: a slang phrase used as a shorthand reference for a future civil war. (Also known as “Boog.”)

Boogaloo Boys (aka Boogaloo Bois): A leaderless group whose “members” seem to have extreme libertarian politics, with a strong emphasis on gun rights. Their objectives vary greatly, from some claiming to be strictly antiracist, while others lean toward white-supremacist beliefs. Group members often post memes to social media pages featuring neo-Nazi themes. Boogalooers love their guns and many openly carry them while wearing colorful Hawaiian shirts as part of their Boogaloo “uniform.” Their stance is anti-authority, anti-state, and definitely anti-law-enforcement. The collapse of American society is quite possibly their ultimate goal. Some members have murdered police officers. Others attempted to aid foreign terrorists.

The Boogaloo movement roughly formed in 2019 and is still developing. When 2020 rolled around, “Boogalooers” increasingly became engaged in protests about gun rights, police shootings/killings, restrictions related to the COVID pandemic and, well, basically anything that involved authority over citizens.

Typically, Boogalooers are not white supremacists. In fact, as a result of their anti-cop beliefs, many actively participated in the Black Lives Matters protests following the killing of George Floyd by Minneapolis police. Most likely, though, the George Floyd protests were an excuse to confront and attack law enforcement.

In May 2020, a 26-year-old Texas man, Ivan Harrison Hunter, participated in one of the Floyd protests. He was seen wearing a tactical vest and a skull mask over his face as he used an AK-47 style rifle to fire 13 shots into an occupied police building. Shortly after Hunter fired those rounds the building was set ablaze. Hunter also claimed to have joined with members of the Black Panthers organization to burn other police stations.

Shortly after Hunter fired those rounds into the police precinct he sent a brief series of messages to a a fellow Boogalooer in California, a man named Steven Carrillo.

“I did better lol,” replied Carrillo.

Later in the year, Carrillo was arrested and accused of shooting and killing a Santa Cruz, Ca. sheriff’s deputy. Prior to the arrest, Carrillo used his own blood to scrawl the word “BOOG” on the hood of a white van.

Boogalooers believe in a vast assortment of causes, from “wanting the heads of politicians on spikes,” to “wanting pedophiles to die by putting them feet-first in wood chippers.”

The group is so loosely organized that one faction of Boogaloorers seem to support Black Lives Matter, while others muddy the waters by posting an opposite view on social media—“F*** BLM. They’re one of the most racist groups out there. It is ignorant to think BLM isn’t a terrorist organization filled with black supremacists, and white liberal Marxists.”

Boogaloo Michael Solomon and Benjamin Ryan Teeter have been accused and arrested for their plot to sell weapons to someone they thought to be a member of the terrorist group Hamas. The person with whom they’d planned to do conduct business was an undercover FBI agent. Prosecutors say the pair considered becoming “mercenaries” for Hamas in order to fund the boogaloo movement.

In October 2020, eight boogalooers were tied to the plot to overthrow Michigan’s state government. Part of the plan was to kidnap Gov. Gretchen Whitmer. Fortunately the FBI thwarted those actions by arresting Adam Fox, Ty Garbin, and Daniel Harris before the kidnapping could be carried out. The other five men involved were also arrested by the FBI. However, in addition to federal charges, the five men also face state charges of plotting to attack Michigan’s Capitol for the purpose of initiating a civil war.

The basis for the plan centered around Gov. Whitmer’s strict COVID lockdown regulations.

As bizarre as this all sounds, the Boogaloo movement is quite real.

Unfortunately, another casualty caused by the Boogaloo movement are the few brightly-colored, extremely comfortable, Hawaiian-style shirts hanging in my closet to which I must now say goodbye.

The good side to all of this, however, is that writers have more wacky fodder for stories than ever before. Strange politics, spies, moles, whistleblowers, secret meetings, etc. So a Hawaiian-shirt-wearing villain could be shaped into an interesting villain, right? Nah, who’d believe such nonsense could happen in real life?