Ever wonder what it’s like to kill someone? Well, I don’t have that worry. Been there, done that. And I’ve lived with the dead guy’s soul scrabbling around inside my head ever since. Once you’ve pulled the trigger sending the bullets on their way, that’s it. You can’t call them back.

Several years ago I responded to a silent bank alarm—a 10-90 as it was called in our department. The day started with me sitting in my office reading the offense reports from the previous night. Nothing special—a few drunks, some minor drug activity, a couple of break-ins, and the usual domestic he said-she saids.

Then it happened. A young man—22 years old—walked into a bank, pointed a gun at the teller and took all the money he could carry in his white, wrinkled, plastic grocery bag. He scared the poor teller to tears. Victim number one.

The robber fled the scene and wrecked his car trying to escape. Five of us cornered the guy in a drainage ditch beside his car. He decided to shoot it out with us. Big mistake.

Three officers had taken cover on the the top of a highway exit ramp, just out of the robber’s line of sight. I was closest to the gunman—twenty-five yards away to his left. Another officer, a fresh-out-of-the-academy rookie, was near me, to my right. My only cover was a small maple tree. A very small maple tree. At the time it seemed like a toothpick with a few leaves. I felt that he could easily see me, like I had no cover at all.

The robber had crouched down near the rear bumper of his car. I watched him load his weapon, an old revolver. I yelled, begging him to drop the gun and come to us with his hands up. He ignored my commands and fired a shot toward my fellow officers on the hilltop.

Someone flipped the “Slow-Motion Switch”

The sound of his gunshot activated my brain’s slow-motion function. Time nearly stopped. It was surreal, like I actually had time to look around before reacting to the gunshot. I saw my partners yelling, their mouths opening and closing slowly. Lazy puffs of blue-black smoke drifted upward from their gun barrels. I saw a dog barking to my right—its head lifting with each yap, and droplets of spittle dotted the air around its face.

I turned back to the robber, took aim, and fired a single shot through the rear, side glass of the car and into the side of his head, the only part of the body I could see at the time. He fell over on his right side. I thought it was all over. Instead, the guy popped back up, smiling. I couldn’t believe it.

A shot to the head from my SIG Sauer and he acted as if it were no more than a slight irritation, if that. In fact, he stood and began firing again. I answered each of his rounds with three of my own, all three directly into his chest. He fell each time a shot hit him, but each time he stayed down only for a second. 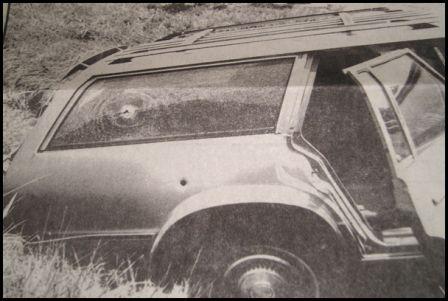 Bullet hole in the rear glass from my shot. The large hole in the side of the car is from a slug fired from an officer’s shotgun.

He popped up once more to fire another round, and that’s when my fifth bullet hit him, again in the chest. He stayed down this time. I called to everyone on my portable radio, letting them know it was over. Then, suddenly, the robber jumped up and ran toward the officers on the hill. Unbelievable.

I ran after him. He stumbled. And I and a sheriff’s deputy tackled him. We rolled him over to handcuff him and saw that he still clutched his weapon in his right hand and was squeezing the trigger repeatedly. To this day, I can still hear the click, click, click of the hammer each time it fell.

The gun was empty. He was out of ammunition. 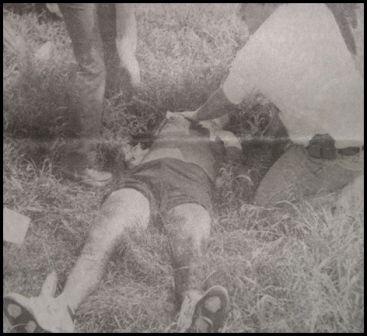 I didn’t know it—not a clue—but that’s precisely the moment my life ended, too. Well, the life I’d always known. The one where I was always happy. Never a worry. Happy…yeah, right. It wouldn’t be long before I’d forget that word existed. Not long at all.

The second my last bullet entered the robber’s body, his soul was already trying to make its way into my head, wanting to worm and writhe inside my thoughts and emotions.

You see, in those days there was no such thing as counseling and de-briefing. No post-shooting administrative leave. No desk duty. I was left to fend for myself. Tough cops were supposed to handle whatever came their way. And I was a tough-as-nails cop, or so I thought.

My chief actually told me that a real cop would just suck it up. In fact, he sent me to the morgue to photograph the body and to remove my handcuffs from the dead man’s wrists. I was stunned. After one of the most gut-wrenching and traumatic events of my life, I wasn’t even given the rest of the day off.

I’ll never forget the moment I pushed open the door to the morgue and saw the robber’s body lying there. No sheet. Just flesh on cool stainless steel. My eyes were immediately drawn to the tiny bullet wound on the side of his face. A line of rusty-brown blood had dried there, looking like a parched Arizona creek bed. I walked slowly toward the corpse and reached for the dead man’s wrists to unlock the handcuffs.

Just before my fingers touched the metal I saw that more blood had collected and dried in many of the nooks and crannies of the steel restraints. I had to take a moment to collect myself before I was actually able to touch them. And I tried really hard to not touch his skin. Really hard. But I couldn’t avoid it. It was cold and firm, like old jello that had sat in the refrigerator far too long.  I never used those handcuffs again.

Yes, a robber died that morning—a bad guy—and his soul left for wherever it is that troubled souls go. But a part of my emotions were tethered to him, and it was several years before they returned.

Two days after the shooting, my partner and I met with the medical examiner (this was the same medical examiner’s office where Patricia Cornwell based her Kay Scarpetta series).  Even though I’d watched each of my bullets travel through the air until they hit the robber’s flesh (those who shoot a lot have this ability), it still hit like a ton of bricks when she told me that all five of the rounds in the man’s body were fired by me. The famous pathologist spared no details. She described the damage caused by each bullet, and she told me which rounds were the life-stopping rounds. I could, and did, recall firing each one. Still can, just like it was yesterday.

In the beginning, the dead guy visited me only during my sleep. Soon, though, he grew restless and figured if he couldn’t sleep then neither would I. He began stopping by to see me while I was at work, and eventually he came to me during my off time. He walked beside me while I mowed the grass, and accompanied me to the store. His voice pierced my ears like shrill sirens. His spirit raked its jagged nails across the back of my neck just to let me know it was in the backseat as I drove my unmarked police car.

There was no downward spiral. No, for me it wasn’t that slow and easy. This was a free-fall straight to hell. Fortunately, just before I hit bottom I sought help on my own.

It took a few years to climb out of that dark pit, but I made it back and I actually think I’m a stronger person because of the experience. If nothing else, I have a real-life horror story to share.

Sixty-eight rounds of ammunition were fired during this shootout. The robber was hit five times, all five rounds were fired by me.  One police car was destroyed by gunfire. Luckily, no police officers were injured during the actual firefight. However, within a year after the shootout, one officer suffered a heart attack and died. He was 44. Two officers quit, and two retired (both are now dead). I, too, left law enforcement behind within a year after the shooting. Not one of us had received any de-briefing or counseling.

I’d say all total, there were six victims that day. 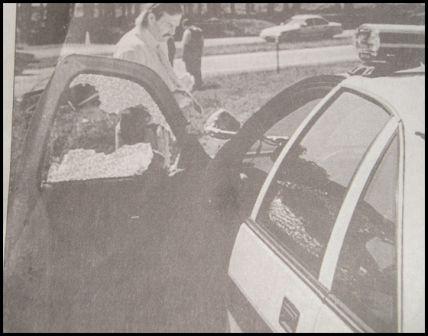 Police car destroyed by gunfire. That’s me with the cop/pornstar mustache. This photo was taken by a newspaper photographer just minutes after the robber had succumbed to his wounds.

Interesting to note – When I transitioned from a sheriff’s office to a city police agency, the new department issued Ruger 9mms. The one I received sounded and handled as if it would fly into a million pieces at any second. No one seemed to have any idea how to repair it and the department refused to issue another. So, my concerned, wonderful wife gifted the SIG P228 to me as a Christmas present. It was only a few months later when this shootout occurred. I believe the combination of the SIG and my training and fairly decent marksmanship were the factors that saved my life and the life of others. Thanks, Denene, and a big thanks to a fine weapon—SIG Sauer.