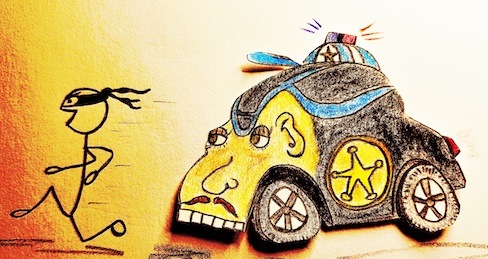 We all use them, those convenient “never-have-to-get-out-of-our-car” establishments, the joints that help us in our quests to not have to get off our ample rear ends to do, well, just about anything.

You know the places I mean, the drive-through fast food joints, drive-through coffee shops, and even drive-through funeral homes where occupants of minivans and Hondas can pull up to a viewing window to see dear old Uncle Sammy laid out in his finest Sunday “go to meetin'” seersucker suit while you listen to your favorite jams playing on Sirius radio.

Now, believe it or not, there’s a new drive-through that’s possibly coming to your town—Court in a Cop Car.

Court in a Cop Car

Yes indeed, no longer will Billy Buck Stealsstuff have the added worry of wondering how long he’ll have to wait before he gets a bit of face time with a judge, the official who he hopes and prays will grant him a low bail amount so he can get back home in time to watch the latest “can’t miss” episode of Swamp People.

Billy Buck loves, loves, loves to hear good ‘ol boy Troy Landry yelling “choot ’em” (shoot him) to the deckhand du jour, the person wielding the rifle that’s used to pop the gator between the eyes so the tobacco-chewing pair can reel in their catch without becoming the gator’s appetizer. It’s can’t miss television, so Billy Buck is extremely happy when he hears the arresting officer call for the department’s shiny and new specialized car.

Nope, there’s no wait time with Motorola’s newly- and specially-designed and soon-to-be patented police car, a vehicle that features a built-in weapon scanner in case Billy Buck is carrying a concealed firearm or knife, etc., an air filter that detects the presence of alcohol and drugs, and a combined fingerprint scanner and facial recognition system that conducts instant background checks.

Next, and here’s the best part of this judiciary contraption, by making use of several video screens, cameras, and microphones mounted into the car, Billy Buck, by live video feed to a courthouse, instantly meets both his public defender and the judge. Then, after a computerized virtual assistant explains the process, a brief hearing is then held. If the judge on the other end of the video allows a bond to be posted, the funds are collected on the spot—cash or credit card, please. If not, and here’s the cool part, the car takes the suspect to jail to be processed.

Ah, I sense your confusion. Yes, the car is autonomous, meaning there’s no driver. It arrives to the scene on its own after it’s summoned there by the arresting officer, and it drives itself to the jail. Therefore, officers are free to go back to patrolling the streets and answering calls instead of spending a couple of hours mind-numbing hours babysitting the bad guys during the processing/booking stage.

Will there also be autonomous cop car bars where robots serve gas and oil on the rocks? 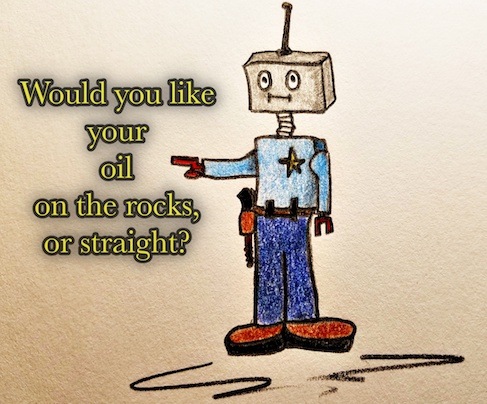