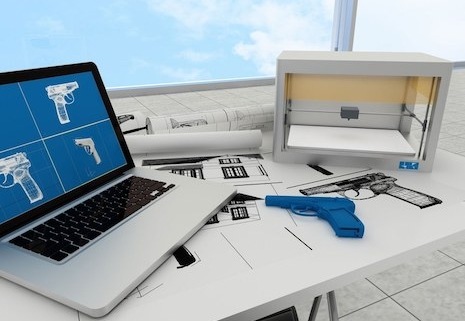 3D-printed guns, firearms made from plastic, using 3D printers, can be fashioned in such a manner that they’re undetectable by typical metal detecting technology. Obviously, such guns pose a serious threat to law enforcement’s ability to keep dangerous weapons out of the hands of criminals.

Some people who make these firearms include the proper metal parts to meet federally mandated requirements. They do so to comply with a federal ban on weapons that aren’t revealed by metal detectors.

Unfortunately, there are many people out there who bypass federal laws and produce 3D guns that will certainly be used to commit crimes. This is especially so for people who are unable to purchase firearms legally.

This type of weapon, the guns that can potentially go undetected by metal detectors, could be carried into high security areas, causing a nightmare scenario for travel security personnel, such as TSA, courtrooms, jails, etc.

The nightmare continues for investigators who’re working to solve homicide cases, robberies, assaults with deadly weapons. I say this because the 3D-printed, plastic firearms bear no traceable serial numbers. And, yes, plastic bullets are available for use in these guns.

I believe it was sometime in 2013 when blueprints for 3D firearms began to appear on the internet. The first 3D gun was named the “Liberator,” and blueprints for it were posted online. Within  a period of just two days, those plans were downloaded over 100,000 times.

The U.S. State Department soon contacted the gun-smithing group responsible for posting the plans, Defense Distributed Company, to request that they remove the blueprints from the internet. The company complied, however, the information was out and  was still made available through pirate-type sites.

For example, Ivan the Troll, the informal spokesman of an underground group of 3D-printing gunsmiths, told Jake Hanrahan of the website WIRED, that “he knows of at least 100 people who are actively developing 3D-printed gun technology, and he claims there are thousands taking part in the network. This loose-knit community spans across the whole world.”(Quote from a  Wired article titled 3D-printed guns are back, and this time they are unstoppable).

Ivan has recorded and posted online several videos showing how to make/print/assemble these illegal 3D firearms. However, YouTube, Facebook, and other social media sites remove them practically as fast as they go live. Still, sites still exist where those videos may be viewed, and they show and explain precisely how to make an illegal 3D printed firearm. For obvious reasons, I choose to not post the links. But they’re easy to locate. These “how-to” videos make it extremely easy for criminals to make their own untraceable firearms.

Fortunately, reputable companies and top scientists have evaluated the differences between 3D-printed guns and conventional firearms and then used a technique of analytical mass spectrometry to identify the various types polymers found in 3D-printed gun evidence.

Next, they created a reference library/database of the various polymer samples for future comparison of polymer samples found at crime scenes to found 3D firearms and to other locations where they polymer traces may be located. They could possibly be traced back to the source of fabrication.

A new technique, direct analysis in real time (DART), is available to detect and identify a large number of compounds found in Gun Shot Residue (GSR). DRT uses mass spectrometry to conduct analysis in real time. The process detects and identifies traces of polymer and GSR compounds on the bullets, casings, and in the GSR collected from the clothing of victims and suspects.

In short, in addition to investigators collecting and testing the usual GSR found at crime scenes, on a victim’s body and clothing, and on the clothing and hands of suspected shooters, CSIs and detectives should also search for material such as the polymers of various types and colors—ABS, PLA, PETG, and CPE.

Homemade firing pins are not the standard type and/or material found in traditional firearms. Those made in a basement workshop range from drill bit blanks of machined 1/800 steel, to the shafts of roofing nails. The machining of firing pins can easily be accomplished using using a simple Dremel tool purchased from a neighborhood hardware or big box store, or from online outlets such as Amazon, Walmart, Target, etc. 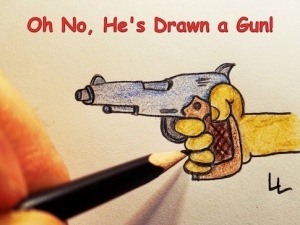 Is a firearm illegal if it is made of plastic?

“It shall be unlawful for any person to manufacture, import, sell, ship, deliver, possess, transfer, or receive any firearm—

(B) any major component of which, when subjected to inspection by the types of x-ray machines commonly used at airports, does not generate an image that accurately depicts the shape of the component. Barium sulfate or other compounds may be used in the fabrication of the component.”

What does “any other weapon” mean?

The term “any other weapon” means any weapon or device capable of being concealed on the person from which a shot can be discharged through the energy of an explosive, a pistol or revolver having a barrel with a smooth bore designed or redesigned to fire a fixed shotgun shell, weapons with combination shotgun and rifle barrels 12 inches or more, less than 18 inches in length, from which only a single discharge can be made from either barrel without manual reloading, and shall include any such weapon which may be readily restored to fire. Such term shall not include a pistol or a revolver having a rifled bore, or rifled bores, or weapons designed, made, or intended to be fired from the shoulder and not capable of firing fixed ammunition.

If an individual makes an item that falls into the “any other weapon” category, is that individual required to register the item?

Yes, an “any other weapon” category is an NFA classification which requires an individual to register the item with ATF.

How does one apply for a license?

The applicant must submit ATF Form 7(5310.12)/7CR(5310.16), Application for Federal Firearms License, with the appropriate fee, in accordance with the instructions on the form to ATF.  This form is for all FFL types, including type 03 Collector of Curios and Relics.  An application packet may be obtained by contacting the ATF Distribution Center.  If you have more than 1 Responsible Person (RP), you must also submit a Supplement to ATF Form 7/7CR, for each additional RP.

Can an individual now manufacture these firearms and sell them?

Any person “engaged in the business” as a manufacturer must obtain a license from ATF.

The term “engaged in the business” means— (A) as applied to a manufacturer of firearms, a person who devotes time, attention, and labor to manufacturing firearms as a regular course of trade or business with the principal objective of livelihood and profit through the sale or distribution of the firearms manufactured.

What is ATF doing to make sure this technology is monitored so it is not used illegally?

What is ATF doing in regards to people making their own firearms?

An individual may generally make a firearm for personal use. However, individuals engaged in the business of manufacturing firearms for sale or distribution must be licensed by ATF. Additionally, there are certain restrictions on the making of firearms subject to the National Firearms Act.

What say does ATF have in the technology used to produce firearms?

ATF enforces Federal firearms laws and, currently, these laws do not limit the technology or processes that may be used to produce firearms. However, ATF enforces existing statutes and investigates any cases in which technological advances allow individuals to avoid complying with these laws.

Yes. ATF routinely collaborates with the firearms industry and law enforcement to monitor new technologies and current manufacturing trends that could potentially impact the safety of the public.

*Note: It is NOT legal for felons or somebody otherwise prohibited from possessing firearms, or  to build their own guns from any material.