From time to time I turn to my good friend Madam Zorba for advice, especially when I’m troubled. And what could be more concerning than the 2016 presidential election? So, I stopped by the wise soothsayer’s place of business this morning to see if she had any thoughts about the latest scandal involving FBI director, James Comey, and his recent announcement regarding a federal “Weiner probe.”

Here’s what she had to say.

2. Trump, if elected (this information is still extremely cloudy), will appoint Anthony Weiner as the new FBI director.

4. It is because of Comey’s Weiner probe that hot dog stocks plummet to record lows.

5. Trump loves Comey’s weiners, with or without hot sauce.

7. The Trump campaign trades their tour bus for the Oscar Meyer Weinermobile.

8. Madam Zorba showed me an image that appeared inside her crystal ball. 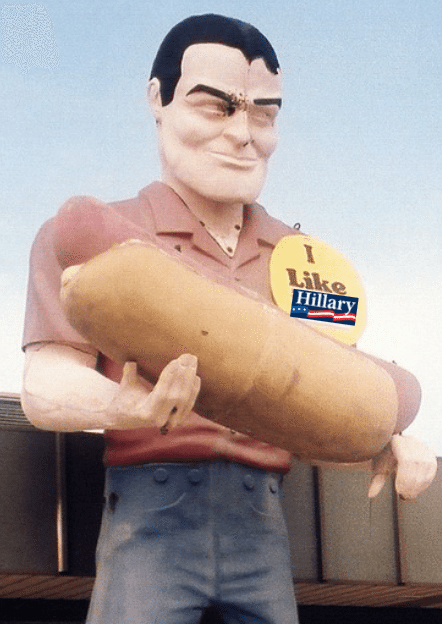 9. The first image faded and was replaced by …

*Please, I am not endorsing or promoting either presidential candidate. This post is intended as a tongue-in-cheek chuckle, albeit a corny one, at the latest development in the election. It’s a JOKE. Do NOT attempt to read between the lines because there’s nothing there but blank space. And, this blog is not the place for political rants and raves or arguments about gun control, race, and/or religion.

Finally, Madam Zorba was not harmed during the writing of this blog post. However, she did report feeling a bit nauseous. I certainly understand.