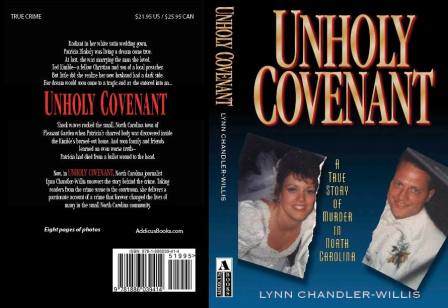 In my world, nothing could be a more true testament to “it’s all fun and games until someone gets killed,” than writing in the True Crime genre. I’ve written fiction and I’ve written non-fiction and without a doubt, the non-fiction is the one that took its tole.

My first published book (Unholy Covenant, Addicus Book, 2000) was in the true crime genre. It was the story of two brothers who conspired to kill the older brother’s devoted wife. I was fortunate that the murder happened in my own community so there was no travel or years long research involved. I knew both families, the victims and the suspects.

Technical research was minimal because at that time, I owned and published a community newspaper who covered the story from the crime through the trial. During the first brother’s trial I sat in the courtroom every day, every hour, through every minute of testimony. I knew shortly into the trial, the story would make a good book.

It had all the elements: murder, money, greed, young beautiful bride, and deep religious overtones. The late Reverend Jerry Falwell even testified, creating a local media feeding frenzy. It was all so sensational! Just what the public craved.

It’s one thing to do research for your fiction, you know—how to murder someone 101—but it’s an entirely different thing when you’re sitting across the kitchen table from the victim’s mother asking her to share her thoughts on her daughter’s cold-blooded, premeditated murder. Some writers can do it and not blink twice. I discovered, after the fact, I wasn’t one of those writers.

The case, and book, garnered national attention. I did radio shows, television and newspaper interviews and even negotiated with a producer who wanted to buy the movie rights. I walked away from the bargaining table when he told me what he had planned—he wanted to make the victim a school teacher and the veteran detective a rookie. These are real people, I kept telling myself. They’re not made up characters.

I did agree to do a couple detective-type shows because they were based on the facts of the case, not characters created by a producer. One was for the Lifetime network and featured interviews and recreations. By this time, the book had been out a few years and the victim’s death had occurred several years prior. Yet, for the victim’s mother and brother—the pain was still there. No matter how many years had passed, each time another network called, the wounds were opened yet again. How could they ever move past the trauma of losing their daughter and sister when we kept pulling them back in?

With all the local and national exposure the case and book received, I had several people contact me with their “story”. Would I look into their brother’s death? Would I look into their son’s suicide? Here’s a story for you—I was told many times. Do you know how hard it is to tell someone who has lost a loved one to crime that sorry, your son/husband/brother/sister’s murder wasn’t sensational enough? Did it involve sex? Money? Greed? Was the victim a good person? Sorry, your loved ones death wasn’t the stuff books and movies are made of.
Although I don’t have plans to ever write another true crime book, I’m using what I learned from that experience in my fiction. Primarily, the varied emotions of the victims of crime or like in Wink of an Eye, the survivors.

In Wink of an Eye, a young boy hires a private investigator to investigate his father’s alleged suicide. The kid doesn’t believe his father would have ever taken his own life and wants to prove he was, in fact, murdered. I drew on those past interviews with the mother of the victim in Unholy Covenant to tap into the raw emotions of losing someone to murder. The longing to see them again, the need to know why, the confusion of not understanding how an investigation works…I used this knowledge to create the drive and tenacity of a twelve year-old boy out to prove his father didn’t kill himself.

I have no regrets about writing Unholy Covenant. It’s a tragic story and because it’s down on paper, Patricia’s story is immortalized. The book is in its third printing which means, fifteen years later, people are still reading Patricia’s story. For that, I’m truly thankful.

Lynn Chandler Willis is the first woman in ten years to win the St. Martin’s Press/Private Eye Writers of America Best 1st PI Novel competition with her novel, Wink of an Eye (Minotaur 2014). Her other works, The Rising (Pelican Book Group, 2013) is an INSPY Award finalist and Grace Award winner for Excellence in Faith-based Fiction, and Unholy Covenant (Addicus Books, 2000) is now in it’s third printing.