Inmate J.L. Bird had never heard of the Justice Prisoner and Alien Transportation System (JPATS), let alone be a part of their mobile inventory. And after experiencing it, well, he didn’t care if he never heard of it again…ever.

He’d been traveling with JPATS for three days and already he was sick of it. He was also pretty darn sick of the U.S. Marshals who watched his every move, including during bathroom breaks. He was weary of flying a zig-zagged pattern across the U.S., landing at what seemed like every remote airfield in the country to either drop off or pick up inmates.

Then came the never-ending, end of the day van rides to county jails, the holdover facilities located in hick towns that were surely too small and too backward to be considered even for the filming of Deliverance. In fact, Bird was quite sure that most of their holdover locations were in towns with names recognized only by loyal viewers of Hee Haw—places like Bumpass and Doodlum, Va., and Talking Rock, Ga., the little honey hole in Pickens County nestled between Ellijay and Jasper. Yeah, those fine metropolises.

Bird did learn that in exchange for holding federal prisoners, the federal government paid county sheriffs $70 per day per federal inmate held. And that’s a pretty sweet deal for merely furnishing a blanket on a concrete floor, a couple of boiled eggs, and maybe a dry sandwich made from stale bread and greenish-tan bologna.

He also learned that deputy sheriff’s didn’t give a rat’s patootie about federal prisoners, and that they pretty-much ignored him and the others. In fact, many of the star-wearing deputies mistreated the federal prisoners, forcing them to sleep on the floor in dirty, unused cells. Bird and his crew were the last to be fed, receiving leftovers, and they were the last to see soap and water. Therefore, they often went several days without bathing, deodorant, or brushing their teeth. And that really made for a sweet-smelling ride in the back of hot vans, and airplanes that recycled the cabin air.

But, after several unpleasant layovers in county jails, the JPATS jet finally touched down at Will Rogers airport in Oklahoma City. A real airport with real people scurrying about, tending to whatever duties are assigned to airport workers. Bird was ecstatic. He was overjoyed at the thought of seeing honest-to-God people other than the unwashed pack he’d been traveling with for the past several days. 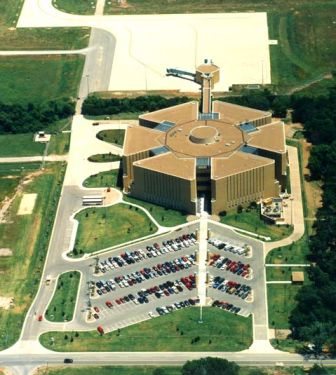 FTC Oklahoma. The jetway is pictured at the top of the image.

The JPATS jet taxied to the far west corner of the airport, though, bypassing the regular terminals, and pulled alongside a private jetway leading to a brick building that stood alone on the airport property. This was the Federal Transport Center.

The FTC Oklahoma City is the hub for JPATS air transport. It’s the facility where many federal inmates are housed until they’re assigned to a permanent prison. It’s also where prisoners are housed while in transit to new prisons, court, etc. Bird finally learned that he was on his way to a hearing at the federal court in Richmond, Va. 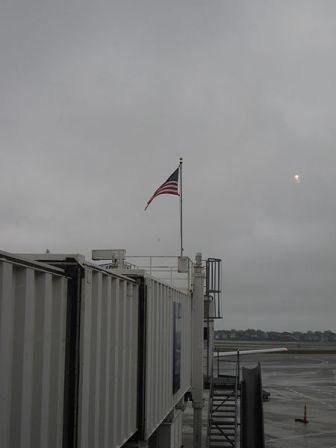 “Absolutely no talking!” shouted the marshal who’d stepped inside from the jetway. He rubbed his stubby fingers across his buzz-cut. “Not a sound unless one of us asks you a question. You’ll stand perfectly still until a marshal or other officer gives you a command. Do not, and I repeat, do not let your ankle chains mar the floors in the hallway. Okay, let’s go. Single file. In the jetway, now!”

Unfortunately, for Bird, he’d see not a single civilian. The jetway led directly into the prison facility. However, he was pleasantly surprised at how clean and fresh it was inside. The floors were highly polished and there wasn’t a single blemish on the stark white walls. Overheard fluorescent fixtures lit the long hallway like a night game in Fenway Park.

Bird and his fellow travelers made their way along the wall (following a red line painted on the floor) until they reached three BOP officers who were busy removing handcuffs, waist chains, and leg irons. Bird was elated when the set of leg irons were removed from his ankles. Wearing the steel cuffs daily for a week had rubbed the thin skin there until it was raw and extremely sore.

Next came a brief orientation, a chat with a psychologist, a quick consult with a counselor, and then to their assigned housing units. Bird met his unit officer who assigned him to a cell. Again, Bird was pleased to find a spotless cell, complete with a soft mattress, soft pillow, a large window, and a real door. No bars!

Bird was also pleased to learn that he could shower whenever he liked and as many times as he liked. And, the facility provided the inmates with soap, shampoo, deodorant, toothpaste, and more. And, within minutes, kitchen workers delivered a hot meal to the unit for those who’d been traveling all day. The food was absolutely delicious. Real bone-in chicken. Not the unidentifiable ground goop he’d been used to eating back at the prison.

The unit was quiet. The inmates seemed pleasant (he’d discovered that he’d been assigned to a low security unit). And the guard was a guy who addressed the inmates either by their last names or by calling them “sir.” As in, “Thank you, sir.” “Sir, when you get a minute would you please stop by my desk.” And the prisoners did the same in return. There was no shortage of respect.

It was late in the day when the JPATS jet touched down in Oklahoma, so it wasn’t long before the sun set. Bird noticed that as soon as it was dark outside, all the cells/rooms on his side of the unit went dark. Not a single light on in either of them. The cells across the day-room, opposite his, were all brightly lit. He also noticed that most of the inmates had suddenly disappeared into the darkened cells, and it was not yet time for lockdown. Curious, he asked one of the few remaining prisoners, a slack-jawed, flamboyantly gay guy who’d somehow managed to paint his fingernails fire engine red, about the strange occurrence.

“”It’s showtime,” he said. “Not my cup of tea, though…if you know what I mean.” He winked at Bird, but Bird didn’t have a clue what he meant, and his confused expression prompted the prison sweetie to say, “Go have a look. You’ll see.”

So Bird opened the door to his cell and found a gaggle of prisoners gathered at the narrow window, looking across to the next wing. Bird quickly saw the attraction. The next unit over, with windows perfectly aligned with those in Bird’s unit, was the unit that housed female prisoners. Bird also noticed that while the lights were off on his side of the unit, the rooms across the way were brightly lit.

And standing, sitting, dancing, jiggling, wiggling, or gyrating in each window, was a totally nude female prisoner who was working hard to entertain the male population of the transfer center. 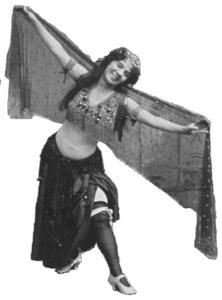 It was indeed showtime in Oklahoma, a long-standing tradition, and each cell had its own private, live peep show that lasted until lights out at 10 p.m.

Bird slept better that night than he had in a long, long time. And he went to sleep feeling a little dirty, even though he’d showered three times in as many hours.

*Of course, inmate J.L. Bird is an imaginary prisoner, however, his journey is one of thousands that take place each and every work day of every week. JPATS is indeed a very busy operation. Oh, the peep shows are also very real…