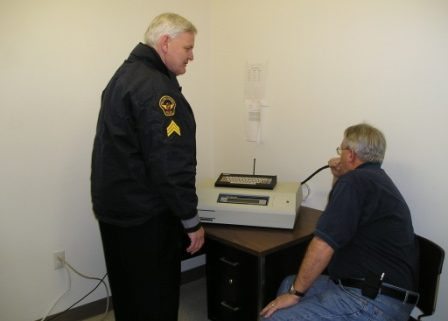 The party was a blast and you drank a little of everything in sight, including a swallow from the host’s aquarium. Sure, it was a dare, and you spit the goldfish back into the tank, but that should’ve been the first hint that you’d consumed a wee bit too much alcohol. But it wasn’t. Neither was carrying on a conversation with the coat rack and kissing your boss goodbye before stumbling outside where you relieved yourself into a bed of pansies while singing a medley of Celine Dion tunes.

You weren’t drunk. No, not you. At least that’s what your lips were saying while your brain was doing its best to tread water in a whirlpool of beer, whiskey, rum, and tequila. So you got behind the wheel of your prized VW and headed for home. Where you ended up, though, was at the police station, thanks to a few wrong turns and “misunderstandings” with dancing streetlights, mailboxes that insisted on playing chicken with your front bumper, and the row of hedges that used to be a part of the new landscaping in the front yard of the mayor’s house.

So there you sat, quietly humming Lady Gaga’s latest, while a red-faced police officer who, by the way, couldn’t be much older than your kids, fiddled with some sort of gadget while asking you questions. Too many questions, actually. And why, you wondered, did he keep looking at his watch?

Now he’s asking you to…this is ridiculous. You refuse to cooperate with his little test. What’s the worst that could happen? Well…

*These steps apply to the Commonwealth of Virginia. As always, procedures and laws may vary in other areas. By the way, operators/officers conducting the tests must be licensed by the Division of Forensic Sciences. Not all police officers are licensed to conduct the tests.

– The officer must observe the suspect for a minimum of 20 minutes prior to the test. This is so the officer can be certain the suspect has not burped, belched, consumed any additional alcohol, eaten, or consumed beverages of any type.

– the operator presses the enter key on the device, starting a test sequence.

– operator swipes their license through the slot on the device, which then displays their individual information – name, agency, license number, etc.

– operator swipes the suspect’s drivers license, which records their information and enters it in the appropriate lines of the final certificate of analysis. Those without a license require manual entry of information.

– auto testing sequence and purging of the machine is complete at this point. If there is a reading outside the allowable values the testing must be terminated.

– after a few self-check messages, a prompt of “Please blow until the tone stops” begins flashing on the screen.

– the prompt flashes for three minutes, or until the subject blows into the mouthpiece.

– subject blows into the mouthpiece.

– a portion of the breath is then collected into a fuel cell where it is analyzed.

– the mouthpiece is removed and the device purges and waits for the next sample.

– after a two minute wait, and watching the subject to be sure he/she hasn’t burped, etc., a new prompt displays and the operator installs a new mouthpiece.

– the prompt “please blow” appears on the display

The machine provides the data from the two tests and the result used as the official number (blood alcohol content – BAC) is the lowest of the two tests. A certificate of analysis is printed.

Next on the agenda is usually a night spent in jail. By the way, refusing to take the breath test can result in a 12-month suspension of your drivers license and, you could still be found guilty of the DUI if the officer testifies to his observations of your actions during field sobriety tests, etc.

Driving is a privilege, not a right, and everyone who is issued a license to drive (in Va.) implicitly agrees to submit to a breath test when they’re suspected of driving under the influence. No exceptions. 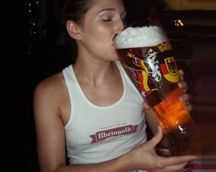 2. Only a small amount of alcohol is excreted through perspiration, the breath, and urine – 2% – 10%

Followon TwitterSubscribeto RSS Feed
Gilbralter: From The Top Of The Rock