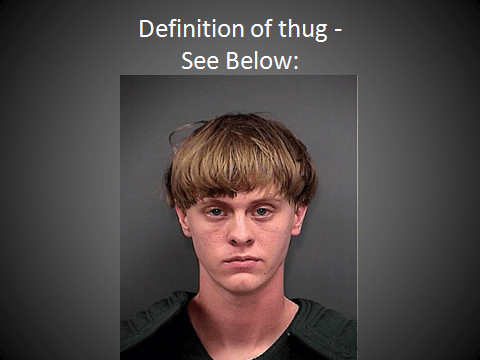 I’ve seen the aftermath of a lot of horror during my time on this planet.

I’ve witnessed an execution via the electric chair.

I’ve held the hands of dying people as they took their last breaths.

I’ve seen the carnage when automobiles and their passengers were ripped apart.

I’ve arrested parents who killed their own children.

And I thought I’d encountered them all—the worst of the worst. Devils in the flesh.

But I was wrong, and that’s because I’d never met Dylann Roof.

I’ll never understand how anyone could detest another person simply because they’re not like him, and with a hatred so strong that he felt compelled to randomly kill decent, loving people. What he did is absolutely beyond comprehension.

Dylann Roof, a common thug, sat in a place of worship for an hour, watching and listening to good people talking about and doing good things, and then stood and shot them as if they were no more than tin cans lined up on a fence rail.

Roof is a thug. A bonafide thug in every sense of the word’s definition—a violent criminal or assassin, and he makes me sick.

*I welcome your comments about the term “thug” and its use, and about the Charleston murders, but please don’t use this site for discussions on racial issues, gun control, politics, and/or religion.