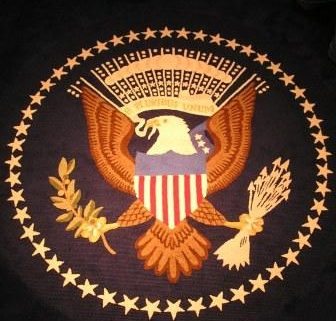 And, I know a secret about the library that no one else does! Soon, you’ll know it too.

A full-size replica of the Oval Office.

Okay, here’s the secret. I noticed this guitar was hanging upside down (it’s a right-handed guitar positioned as if a left-handed guitarist was about to play it)  and it was bugging the heck out me, assuming a non-musician hung it that way. And you know me, I went straight to the top for answers. Well, I was correct, they didn’t know it was upside down. Not a clue. So the head honcho sent a message to someone else who forwarded it to someone else…well, you get the idea. Finally, though, I did receive the information I sought…sort of. Here’s what they told me (basically, they passed the buck). Still, this is great “inside” information that no one knows but you and me.

“This guitar was part of our temporary exhibit “World of Music” which ran from May, 2005 to January, 2006. This exhibit was designed by Ralph Appelbaum and Associates from New York and our museum staff had little to do with the installation.

Because we had little involvement, we can only guess why it was hung that way (it kind of looks like two of the signatures are right side up when you hang it this way, one is sideways and one is upside down) but we cannot say for sure.

One thing I want to make sure you know: This item is no longer on exhibit at the Clinton Library. When it came down in 2006, it was returned to storage.

The guitar was a gift to President Clinton from Hootie and the Blowfish and it is signed by that band.”