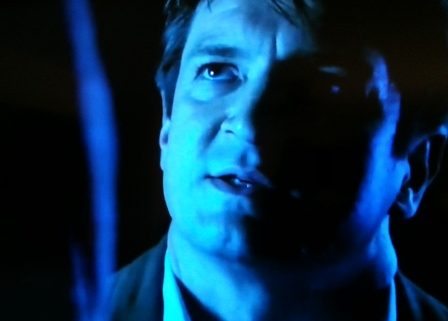 This week’s episode was the first of two parts. The hour sped by for me. I usually watch Castle in real time, with commercials, so I’ll be ready to blog first thing the next morning. So if the plot doesn’t grab me, sometimes time slows and I get really antsy. Not so last night. I looked up and it was 9:55, with only five minutes of show to go. Wow.

The episode’s construction and cinematic feel made time fly, even though the writers brought back the 3XK arc, a thread I grew weary of a long time ago. All through the show, I could hear Lee muttering and shaking his head over the return to this particular storyline. I understand the powers-that-be want to end Rick and Kate’s long-playing battle with Jerry Tyson and Kelly Neiman once and for all, but I have to agree with Lee on this one. Enough is enough. I truly hope those two die or go to prison for life this time, so we won’t have to see them again. 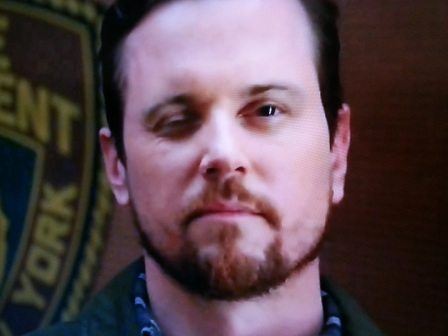 I adored the first scene with our dynamic duo at the loft, of course, with its fun glimpse of Castle family life. Martha and Alexis have obviously accepted Kate with open arms, and this time before Alexis hurries off to the library to study, she kisses her stepmother on the cheek. Surprised, yet thrilled, Rick can’t help but comment, and Kate reminds him that he raised a great person. “You say that now,” he says. “You weren’t here for the beginning.” And she says, “And next time I will be.” Squee! So Kate is thinking about having a baby. Best. Opening. Ever!

Unfortunately, this is the only intimate Kate-Rick scene we get in the episode. The rest of the story revolves around solving the case of a dead blonde in an alley and the return of Kelly Neiman and Jerry Tyson (3XK)… supposedly, anyway. At least Gates and the DA allow Rick to return to the precinct to help Kate and the boys with the case. He and Tyson have faced off on numerous occasions, so he does have at least have background on the pair.

The team soon discovers that all evidence, including DNA, from Tyson’s and Neiman’s earlier crimes has disappeared, and what little new evidence they do dig up signals that Tyson is actually Mike Boudreau, his current alias. New evidence that includes a baby tooth, with its resultant DNA, that Rick and Kate get from Tyson’s stepmother. Tyson, of course, could have easily planted another person’s tooth in her home when he stopped by at an earlier date to pick up his belongings, but no one mentions this possibility. Duh.

Then Kate goes off alone to help a woman who is supposedly scared of Tyson after earlier refusing to even acknowledge she knew him. Right. I immediately pegged her call as a lure to get Kate out of the precinct. Why she goes alone to find this woman, at night, after Gates specifically told her weeks ago to always take someone with her, is beyond me. Gates has also told Kate to always tell someone where she’s going, and Kate doesn’t do this either.

Dumb, dumb, dumb. Kate is smarter than that. In my opinion, this dumb move and her kidnapping on the street in front of God and everybody is lazy writing. Having Tyson grab Kate in more devious fashion would have been more intriguing and less ho-hum, although the Beckett-or-Castle-gets-kidnapped storyline has also been run into the ground. I couldn’t help but picture Lee rolling his eyes when it happened again.

All in all, I love what the writers are trying to do, but I believe they could have come up with a better way of doing it. I’ll still watch next week, of course. I’m a certified Castle addict.

Well, I have mixed feelings about this episode, and it was that internal conflict that made it difficult to write my part of the review alone. Therefore, I called on someone who I felt could sum up everything in a single word, and here’s what he had to say…

Puhleeeeze…. 3XK…again? Do the writers have no new ideas? Is there no creativity left in the bullpen? No thoughts left in the old noggin? Perhaps they should tap into the minds of children. Now there’s a goldmine of imagination just waiting to be mined. Yes, an eight-year-old’s ramblings are far more creative than this recycled BS.

Now for the good news. Lanie was brilliant and totally believable. It’s a shame, though, that it took 7 years for it to happen, and while the rest of the show has begun to crumble.

Lanie’s lividity comment this week was CORRECT for the most part. It is possible that lividity can be used to determine if a victim was moved or not.

And then there’s this… Beckett was yet again kidnapped, but I’ll let her address the stupidity because I’m done with this one. Take it away, Beckett. 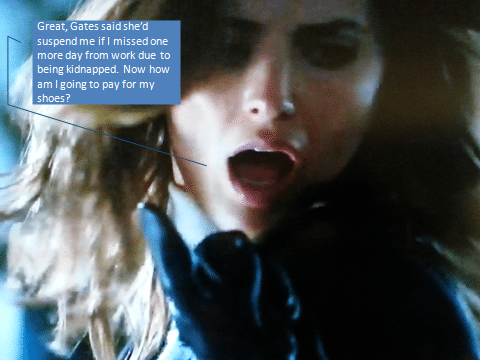 2015 WPA:The Ride Of A Lifetime! PIT Maneuver
Scroll to top