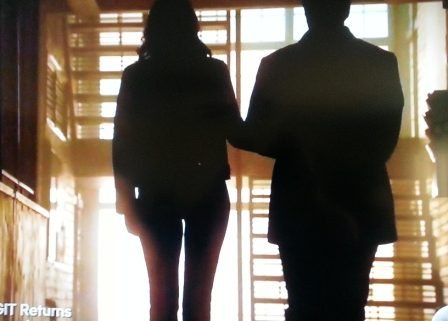 “My new series of PI novels will be inspired by me. I’ll be my own muse.” ~ Richard Castle

Lee went all bad cop on last week’s episode, so my guess is that he’ll probably do the same with this one. He didn’t seem to care for the Castle-as-a-PI angle. Therefore, I’m pretty sure I’m the good cop again this week, because I thoroughly enjoyed Private Eye Caramba.

Instead of this week’s case turning into a competition between Rick and Kate, the two of them worked parallel cases that intersected in many intriguiging ways. As the show opens, Rick is having trouble getting his new venture off the ground, so Kate, being the good wife she is, tosses him a bone by recommending him as the PI who can find the victim’s co-worker’s diamond encrusted purse. I loved that he had his own case this time, even if the cases did intersect.

Only one thing got on my nerves: Rick’s asides as a noir PI, spoken in a tone similar to the one he used as the narrator in season four’s The Blue Butterfly. Everytime he did it last night, even when he and Kate enjoyed a fun bit of role play in Rick’s office, it jerked me right out of the story. Enough silliness, please. Just stick with the story and keep our dynamic duo in this century. I would enjoy that so much better.

In reference to the role playing scene I just mentioned, however, please note that Rick’s search for the purse and Kate’s quest to find the killer had led to long, frustrating work hours. They stayed in touch via phone many times, but didn’t actually spend much screen time together except when they ended up investigating someone or something at the same place at the same time… and of course when Kate visited Rick in his office, resulting in the steamy scene I just spoke of, when they were interrupted by Rick’s client. Bummer. I wanted more steam!

The twists and turns of both cases kept me intrigued thoughtout the show, even though I pegged the telenovella’s showrunner as the killer from the start. Maybe I should consider that another mark against the episode, but it didn’t bother me. I had too much fun delighting in Rick attempt to solve his first case without any help from Kate and the boys. Despite their refusal to aid him, he, of course, ended up finding his client’s purse, thus solving not only his case, but also Kate’s. Typical, but fun. Good for him!

I’m still enjoying the Castle-as-a-PI arc, even though I do look forward to the day he returns to the precinct. That apparently won’t happen when the next show airs in two weeks, but I fully expect him to return to the Twelfth during the big two-part sweeps episodes after that. I do love Castle, and can’t wait for more. What do you think? Do you like this new arc?

Actually, Melanie, I sort of enjoyed this episode and the reason why is quite simple. There were two parallel investigations, meaning Castle didn’t spend the entire hour attempting to worm his way into the PD. He worked his own case and followed his own leads (Sure they crossed with the police investigation. It happens in real life).

Last week it was like watching a Wile E. Coyote trying to get one over on the Roadrunner. That didn’t happen this time, thankfully. So the show was fun (a bit over the top in places, but fun).

Perlmutter is still experiencing a bit a Lanie-itis (the writers have practically ruined what was once a nice, believable character). But he’s still better at coming across as believable than you know who.

By now everyone knows, or should know, that it is indeed possible to retrieve fingerprints from human skin, so that was a nice touch (it didn’t look realistic, but they tried). By the way, we’re offering some pretty detailed fingerprinting workshops at the 2015 Writers’ Police Academy. The sessions are in response to questions posed by writers—lifting prints from wet surfaces, various kinds of tape (sticky side), and more. You will do the print-lifting in the forensic lab.

There were a couple of eye-rolling moments, such as another bout of Castle kidnapping. This has become downright irritating, by the way. Writers are supposed to be creative…so create something NEW!

The interview of the always-predictable killer was also an eye-roller. One question and he spilled his guts.

Finally, one of my favorite lines from the show was in response to Castle flashing his PI identification. “Oh, wow, I thought you were a writer. What happened?”

I often find myself wondering the same thing. The show started out featuring a mystery writer who tagged along with a police detective as a means of bringing realism to his stories. So yeah, what happened?

*In August, hundreds of writers will attend the Writers’ Police Academy to participate in real police training so they, too, can bring an added dimension of realism to their tales. Full details to be announced soon.