Last night’s episode of Castle unfolded pretty much like I expected, but it didn’t end the way I’d hoped it would. Sigh. Some folks are ecstatic the way it turned out, but me? Not so much. I did enjoy the ride for the most part, loved the bits of humor, and am happy Kate finally told Rick the truth about why she left him, but I do wish he hadn’t had to dig up evidence on his own first. She should have just been honest with him from the beginning. I also wanted an end to all the secrecy and this despicable Loksat storyline. No such luck. At least Hayley finally proved herself to be useful—even though I’m with Lee in wondering why she’s on the show at all.

Rick and Kate worked together like old times during much of the episode. I loved it, but still had trouble getting past the lack of a kiss or anything intimate when he first wormed his way into her investigation after their sexy tryst at the end of last week’s show. I still believe Kate is acting out of character. One minute she’s pushing Rick away, and the next she’s all over him. What happened to the settled, in-love wife we saw at the end of last season? I don’t recognize Kate at all at this point. The story has gotten so convoluted, the writers don’t know which way to go. The fix? Hire some romance writers to straighten things out.

I loved the Martha moments, Kate’s talk with the three “Marthas” on board the ship, and Rick’s silly dance routine. And I’m happy Rick and Kate are back together, at least behind the scenes. Their plan to not let anyone else know they’re together again irks me and reminds me of when they first got together and wanted to hide their relationship from everyone at the precinct. How silly, unnecessary, and ridiculous is that?

I’m ready for Castle to return to its roots and become the show I’ve loved for seven years. Please, writers—give us the characters we’re used to seeing when the show returns on February 1 (not in January as I reported last week). I want true Caskett happiness and a baby, but maybe that’s just me. The showrunners have no plans for the latter at this point, from an article I read this morning, but we can hope. Think of the comedy that would ensue! Just please at least get Kate back in character and end this torturous storyline. I’m sick of it.

For me, the fact that Beckett had every reason and means to stop the passenger ship from fleeing the harbor, and didn’t, was part of the reason this episode hovered at a level barely above the “just okay” point. But we’ll come back to the escaping boat in a moment. First let’s talk about the medical examiner portion of the show when we were treated to a visit from Perlmutter. I used the term “treated” because the episodes have historically been better when he shows up. No offense, Lanie, but there’s something about Perlmutter that changes the “feel” of the show.

As usual, Perlmutter delivered believable lines even when the information was slightly off center of reality. However, in defense of Tamala Jones (Lanie), the writers seem to save all the good lines for Arye Gross and assign pure crap to Jones. Perlmutter’s scene last night was a fine example…

Perlmutter ~ “It’s a contact gunshot wound. Looks like she was killed execution style and dumped in the water. Based on blanching and bloating it looks like the body has been in the water for 10-12 hours.” During the exam Perlmutter retrieved a small bag from the victim’s throat, and then said, “I’ll put a rush on this at the lab.”

The lab reference was great. Lane would have somehow instantly known the chemical composition of the bag, it’s contents, and the air around it, along with what everyone who’d touched it had for lunch. The writers must have a some sort of grudge against Jones.

Back to Perlmutter’s dialog. Was it accurate?

First, bloating, of course, occurs during decomposition when bacteria in the gut begin to break down tissue, a process which releases gases into the intestines and abdomen. The accumulation of gases in a dead body will certainly help make it float.

Blanching is a part of livor mortis (lividity), something Castle writers absolutely cannot leave alone. Lividity, the purplish discoloration/staining of tissue as the result of pooling blood at the lowest parts of the body, begins the moment the heart stops beating. The discoloration of tissue is absent from areas where something presses against the skin—clothing, floors, furniture, jewelry, etc. This, the process of squeezing the blood from those areas during lividity, is called blanching. So, I’m not sure how much, if any, blanching would appear on a body that’s been freely floating in water. I say this because there’s no constant pressure on any area of the body, pressure that would force pooling blood away from any particular spot.

Still, Perlmutter’s lines were quite believable in spite of the slight inaccuracies. His delivery of those lines helped us believe whatever he said. So why don’t the writers do the same for Lanie? This is a better mystery than the stupid cases they concoct each and every week.

* To view photos of lividity and blanching click here. Be aware, though, that the photos are extremely graphic. Do NOT click the link if you are sensitive to images of dead bodies during various stages of decomposition. I am very serious here. These photos are graphic!

Now, back to captain of the cruise ship refusing to stop the vessel, citing that the Coast Guard was too far away to intercede. Well, for starters, Coast Guard boats constantly patrol and monitor the waters around New York City (remember terrorism?). And, the NYPD has its own fleet and officers who patrol the waters—N.Y.P.D. Harbor Patrol. Believe me, police boats would be nearby and they’d have no problem stopping a cruise ship, especially one that was a floating murder scene. 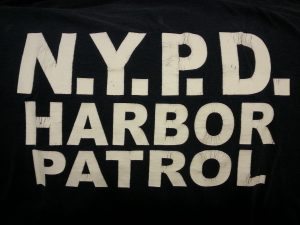 Vikram. Why does he have access to evidence from a murder scene? How and why is he allowed to take a portion of the heroin to conduct his own analysis of the drug? And who performed those tests? Was the drug weighed before the lab gave him a portion of it? After all, removing any of the package contents changes the weight of the drug which, in turn, could affect the charges against an offender. You knew drug weight makes a difference, right?

For example, 100 grams of heroin could earn a 5-year minimum sentence of 5 years in federal prison, whereas one kilo of the same drug guarantees a minimum sentence of ten years (I didn’t research these numbers, but it’s a good guesstimate for the purpose of this paragraph).

And, why is Vikram allowed free access to the NYPD? This guy is annoying. He has no real connection to either character—Beckett or Castle—, yet he’s over-the-top concerned for Castle? From the beginning, I have not liked how he’s been forced on us. The same goes for Hayley. WHO ARE THESE PEOPLE?

The one positive aspect left going for this show are the antics of Ryan and Esposito, and we saw very little of them in this episode, and that was unfortunate. Their absence throughout left a huge hole in the overall experience.

At least Castle and Beckett made kissy-face at the end, and hopefully we’ve seen the last of Beckett’s tiresome nonsense for a while. However, I now expect there’s a lot of over the top, save the world darkness in store for us in upcoming episodes. I hope I’m wrong and the writers will somehow return to the fun side of the show. But I doubt it. They seem to be writing for themselves and not the fans. And that’s truly unfortunate. I picture them huddled around a clunky old computer in their mom’s basement, giggling and punching one another on the arm as they type out these wacky scenes.

At least Castle and Beckett are back together, for now, and that’s a start. But will it last?

The Killing of Laquan McDonald: Murder or a Justifiable Use of Deadly Force...
Scroll to top