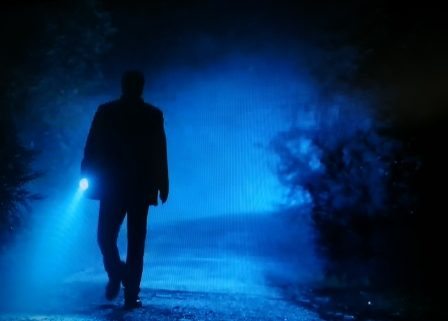 “You know I don’t like to disappoint the ladies.” ~ Esposito

So far I’ve enjoyed the Castle-as-a-PI arc, but I didn’t like this episode nearly as well as I did the last two. The show started out with a glimpse into the future, with Rick getting knocked unconscious in the woods by an unknown assailant, and I knew right away Lee would jump on that. Then the writers took us back twelve hours, to when Rick first got the call about a new case.

Don’t get me wrong; I loved the sweet scene between Rick and Kate discussing the possibility of “napping” later, and the way Kate supports his PI venture. She’s excited for him when he gets the call, and that’s all well and good. I simply had trouble reconciling that she would help him the way she did later, digging into a case in another jurisdiction using precinct resources… but now I’m getting ahead of myself.

To backtrack, I got a big kick out of the Ryan-Esposito storyline. Seems Ryan and Jenny are a bit worried that the couples’ ski weekend they’d planned weeks ago with Espo is about to go down the tubes because Espo is no longer dating Lanie… or anyone else, for that matter. So they sign Espo up on match.com. I laughed out loud at that one.

Meanwhile, Rick dives into his new case, a supposed quest by an old school friend to learn if her husband is having an affair. Not long after getting the call, he witnesses a murder. His client’s murder. This, of course, sends him into a tailspin. He follows her alleged assailant into the woods… and ends up getting whacked on the head.

Takes him a while to wake up and walk to where he can get phone service, because her assailant moved his car, and he calls Kate to tell her what happened. She rushes to the scene.

Kate is reluctant to believe Rick about the murder at first, but he finally convinces her he’s telling the truth, or at least the truth as he believes it — and she jumps into the investigation with both feet. Not only does she build theory with him; she also uses precinct recourses, including Ryan and Esposito, to investigate the case, even though the supposed crime happened in another jurisdiction, with another detective running lead. Gates is out of town, so I guess this means that when’s the cat’s away, the mice will play. Wouldn’t you say?

Ryan has gotten a bit ensnared in his push for Espo to get a date, but he lets go of his personal mission long enough to help his partner dig into the lives of the alleged victim and her husband, a wealthy financier. From there, the plot becomes so twisty, with so many different suspects, that in the end I really didn’t care who had killed — or not killed — the alleged victim. I say that because at one point we learn the victim staged her own murder. Then she turns up dead for real… and the plot takes another weird twist. I have to admit I got a little confused by who was who by the time the real killer emerged.

I like Rick as a PI, but believe the writers got a bit carried away with this particular story. Plot twists aside, Kate’s sweet support of Rick made me smile, as did all the fun Ryan-Espo moments. Espo ended up choosing a match Ryan and Jenny had rejected, by the way, instead of the one they had picked for him. A poet/exotic dancer he invited along for their ski weekend. Too funny.

We needed that bit of lightness, because the next two episodes, a two-parter involving two of Kate and Rick’s old foes, promise to bring us plenty of angst. I hope that plot isn’t as twisty as this one, or I just might feel compelled to commit a murder myself.

I don’t have a lot to say about this episode because, well, it was a bit bland for my tastes. However, I will point out a few minor details that didn’t quite add up.

First, though, let’s get Lanie out of the way, and I can’t believe I’m saying this…she was pretty doggone good. Her comments sounded realistic and they made sense even though a couple were a bit of a stretch. Still, the idea is to come across as believable, and she was. So HOORAY!

Next, Castle is tromping through the woods, at night, searching for a killer. He’s making all sorts of noise AND, he’s waving a flashlight beam up and down and from side to side. Why not paint a bulls eye on his skull and use the light to bash himself in the head to save the killer the trouble of having to do it? Dumb.

Speaking of dumb…what about the tired cliche’ of no cell phone service at the precise moment it’s needed. Yes, they went there.

Detectives, and Castle, are supposedly using a UV light to search for blood inside a suspected killer’s kitchen when they notice a stain. One says, “That’s blood.” No way they’d know it was truly blood without some sort of testing. Those of you attending the 2015 Writers’ Police Academy will have the opportunity to see and use various types of alternate light sources to detect evidence. Registration opens February 14, 2015 at 11 a.m. EST.

The suspected killer tells the detective he needs a drink refill and they let him leave the room unsupervised. That’s an open invitation for the guy to retrieve a couple of hand grenades, a rocket launcher, fourteen knives, and seven handguns, and then set out to kill everyone there before making his escape. Always, always, always keep your murder suspect in sight.

Cliche’ #2. The old “attorney bursts into the interview” routine. Think about it. Who let her inside, and how did she know where or which room to enter?

Castle made a good point when he said Cole was too cocky and narcissistic to kill himself. That’s typically true in real life.

The last red herring/suspect seemed very awkward, like the writers merely tossed him in the script because they thought they needed to fill a void. Seemed forced and weird and really didn’t fit into the plot.

So, that’s it for me. Like Melanie, I wasn’t all that fond of this one. And the previews for next week didn’t leave me feeling too anxious about seeing that one either.

Again, I spotted the killer spot early on. How about you?

*By the way, I am a bit excited about seeing Nathan Fillion on The Big Bang Theory. That should be a hoot.