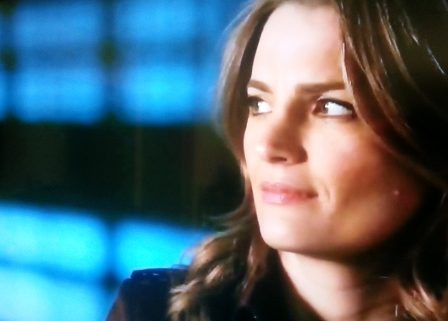 “I’d rather take the criminals down than send them up.” ~ Beckett

I haven’t laughed so hard during a Castle episode in ages. Thank goodness for my Tivo, because I had to back up the action at least three times to rewatch due to not being able to stop cackling. If you haven’t seen the show already, stop reading now so I won’t spoil it for you.

The episode began with a man murdered in an alley. Not one of the funny parts. Next we get a glimpse into the loft, with Kate grilling Alexis with a legal question to help her prepare for one of her finals. Rick overhears and asks Kate, once Alexis leaves, if she regrets never completing law school way back when. She says no and pretty much quashes that possibility, and I can’t say I’m sorry about that. These little hints about the future keep surfacing, however, making me believe she does intend to change the trajectory of her career somewhere along the line. Their conversation soon morphs into flirtation and innuendo and would have taken them to the bedroom if Kate’s phone hadn’t rung.

The call takes them to the alley where sanitation workers found the murder victim. Talk with Esposito and Ryan on the way in centers around the Police Benevolent Society talent show fundraiser coming up. Ryan and Espo are apparently the reigning winners two years in a row, and they plan to win again. I love their can-do attitude. Rick doesn’t work for the department, so he isn’t eligible to participate, but he still can’t help ribbing Espo and Ryan about the competition that would ensue should he and Kate be allowed to join in the fun.

They all must shift their focus to the victim, and we’re immediately dragged off into Lanie-land with more silly talk about lividity determining time of death. I’ve gotten so sick of such nonsense that I didn’t even roll my eyes. I just shuddered. Most of what she had to say was gibberish, as usual, so I ignored it and focused on Kate, who recognized the dead man as an ambulance-chasing lawyer known for his ridiculous late night TV commercials. A lawyer who called himself “Pitbull” and had the ad folks put his head on a pitbull’s body.

Rick, Lanie, Kate, Ryan, and Espo all recognize the man and proceed to quote his commercial word for word… including the ending caveat in Spanish, courtesy of Espo. Oh, my God! I laughed so hard at the line “I make the law your bitch” and Espo’s little spiel. Had to run the show back twice and laughed again this morning while rewatching to write the blog.

The case had lots of twists and turns, each more confusing than the last, but I focused more on the interaction between our dynamic duo and Ryan and Espo… once Gates asked Rick to fill in for Jimmy Kimmel at the benefit, and he says he and Kate will be happy to join the competition. Only Kate isn’t happy. She admonishes Rick for including her without asking her if it’s okay. He tells her to relax, that they’ll just do their “routine”. She gets all flustered and says, “We don’t have a routine,” and he replies, “Come on. That thing in the shower? That is delightful.” Kate, who’s shaking and red faced at this point, says, “No! That’s not a routine. That’s two naked people singing when there’s no one around to see or hear it.” And Rick replies, “So we’ll add dance steps, some clothes… it’s can’t miss.” Ha! The picture this painted cracked me up.

We’re soon swept back into the case and the team’s pursuit of a man called Derek “Lightning” Bolt, a name that encourages them to come up with a plethora of bad puns. Esposito apparently hurts his knee while taking the man down, so Rick accepts a wager with Espo and Ryan that says he believes he and Kate will win the talent competition. More funny lines. I couldn’t stop laughing. 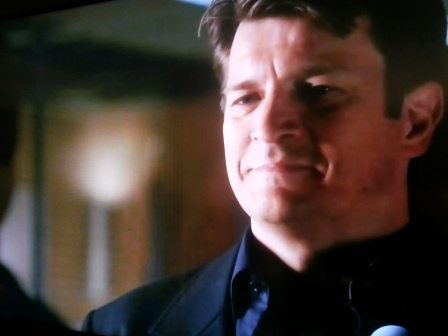 More case work ensues, with Kate, Rick, and the boys bouncing from one lead to another and one suspect to another. I didn’t really care who killed Pitbull, because I knew we’d find out in the end. I was more interested in the upcoming competition… especially when Kate and Rick catch Ryan and Espo practicing their routine in one of the interrogation rooms and discover that Espo really didn’t hurt his knee after all. Kate can’t believe it.

Our duo then apparently turns onto Stupid Lane and heads north out of the city by themselves to look for a dead body in acres and acres of woods, in a tract pinpointed by Tory, the precinct’s regular computer whiz using cell phone technology — yeah, that’s totally believable — with only two shovels for company. Really? Nobody I know in law enforcement would ever do such a dumb thing. Sigh. Anyway, they found the body, but ended up being kidnapped yet again.

None of this part of the script worked for me at all, except for Kate expressing her fears about performing at the competition, but I did have to cackle when Rick announced he’d learned that they could break the zip ties binding their hands behind their backs by slamming them against their butts. Yes, you read that correctly. Their butts. They jumped up and down and hit themselves until they finally broke the zip ties. Wide, flat zip ties that in no way resembled the ones actually used by police. Unbelievably silly, but still pretty funny.

Flash back to the loft and Rick and Kate dancing in preparation for their “routine”, with Martha’s dramatic encouragement thrown in for good measure. Rick leaves the room for a moment, and Kate confides in Martha that she’s not sure she can perform in front of a crowd because she has a bad case of stage fright. Martha attempts to help, but Kate is obviously shaken by the possibility of having to dance and sing in front of everyone. Rick is jazzed and wants to up their bet.

The next morning when they return to the precinct, Espo also wants to up the bet… until Gates tosses cold water on all four of them by announcing that Kimmel was back in, so Rick was no longer eligible to compete. This thrills Kate, but Rick is crushed. Later, however, Kate learns that he was responsible for Kimmel returning to perform, and he admits that yes, he called Kimmel because he overheard her telling his mother about Kate’s debilitating stage fright. So sweet.

Turns out the body they found in the woods was a test dummy with three chest wounds that apparently came from an airbag. Can you say ripped from the headlines? I had to laugh again when they sent the dummy to Lanie, who said, “You do know I’m a doctor, not a puppeteer.” Oh, really? The test dummy would’ve done a better job telling how he’d determined time of death at the beginning of the episode… but I digress. A medical examiner examining a test dummy in the morgue? I laughed out loud when I saw the “guy” on her table. Pu-leese.

They caught the murderer, a guy I’d pegged as shady and likely to be the one who’d killed Pitbull, a nut lawyer with a giant hammer (who had to be an Easter Egg of sorts to remind us that Nathan played Captain Hammer in Dr. Horrible’s Sing-Along Blog) but at this point I was done with the case. I only cared about the competition. Unfortunately, we didn’t get to see it, and neither did Kate and Rick. We did learn, however, that Ryan and Espo won first place for the third year in the row. Yay for them! 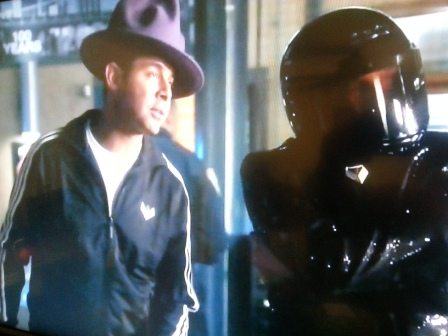 We also never got to see Rick and Kate’s entire routine, but we did have the pleasure of watching them sing and dance in the shower via their shadows on the shower wall, after viewing the trail of clothing they left on the way to the bathroom. Hilarious.

One of the funniest episodes I’ve seen in a long, long time. Next week’s show will be serious, if the promo is like it seems, so I may watch this one a few more times between now and then.

Wow, Melanie and I could not be further apart with our opinions of this episode. Sure, there were a few moments that made me smile, but that was about it. Even the case was a bit weak for me. And, of course, Lanie did not disappoint with her “based on lividity” comment. She even took her “stupid comments” a bit further this week when, while in the morgue, she identified a yellow substance on the victim’s pants legs as pollen from a specific plant from a specific region. But enough about Lanie. Enough. Enough. Enough.

The private investigator/body-digger-upper/kidnapper said the murder victim once asked him, “What’s the best way to get rid of a body?” Boy did that ever ring a familiar bell. If I only had a dollar for every time a writer has asked me the same question…

Then there’s Tory. What can I say about her other than she’s, well, supernatural at minimum.

So…Castle and Beckett head out to the woods to search for a buried body, which they find. Well, they thought that’s what they had found. But, as so totally predictable, they were once again abducted at gunpoint. I mean, for real, watching the show is like reading the same book over and over and over again. It’s the movie Groundhog Day on a weekly loop.

Let’s not forget to mention that the crime-solving duo went to the burial location alone and began to absolutely and totally destroy the crime scene by digging and trampling throughout the place. Holy cow was that ever a dumb scene. And what about the great zip-tie-escape that was so cheesy that, well, it would’ve made Houdini shake his head in embarrassment.

Is this show predictable or what?

I think I’ll sum up my part of this recap/review by using a portion of Lanie’s favorite line. Here goes…

Based on lividity, I believe Castle (the show) is approaching its time of death. Yes, someone has begun the slow insertion of the fork. I think it’s done.

See, I told you Melanie and I were on total opposite ends of the spectrum on this one.

An April Fools Crime-Solving Puzzle: How Sharp Is Your Protagonist?
Scroll to top