Castle is BACK! And Good Cop Melanie and I are here to help you through all the twists and turns. Was the season opener worth the long wait? Well, let’s start the year off with Melanie’s thoughts on last night’s show.

Welcome to Castle, season seven. I so wanted to start this year off as the good cop after watching Driven. I mean, I really did. I despised For Better or Worse, the season six finale, and hoped to start year seven off with a bang. Instead, I’m shaking my head. Don’t get me wrong… Stana Katic’s acting was spectacular. I just can’t help but wonder what the heck the writers were thinking when they came up with the whole season six-seven Kate’s-been-married-before, Rick-crashes-his-car-and-disappears-while-it’s-burning-before-the-wedding scenario. I’m a romance writer, and I would NOT have written Kate and Rick’s story this way. In my version, they would’ve had their storybook wedding before everything went south. Just sayin’.

The whole convoluted plot is what it is. I’m doing my best to roll with the punches, if you’ll pardon the overused cliché, even though I thought the writers shoe-horned way too much story into forty minutes. The beginning scene did grab me, and Stana scored playing the horrified bride, and the burning car sent chills down my spine — even though I knew Rick wasn’t in it, because I’d already feasted on episode sneak peeks. After that, however, I had trouble suspending my disbelief. Before I get into specifics, spoiler alert! If you haven’t watched the episode, you might want to stop reading now and do so, then come back to read the rest of the blog. 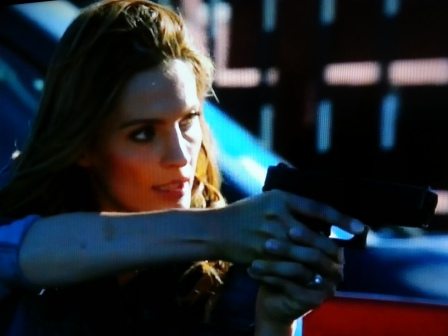 On to the story. I love Kickass Beckett and enjoyed her tackling the guy they chased at the salvage yard. That was truly cool, but her blatant use of force in the interrogation room set my teeth on edge. Sure, I expected her to be ruthless and pull out all the stops in her search for Rick, but I believe she went too far. A little abuse of power goes a long way. Kudos to Esposito for calling her out on it.

The time jump didn’t bother me, maybe because I’d already heard there would be one. I was surprised, however, when the Coast Guard found Rick in the boat so early in the episode. That was a twist I didn’t expect, as was his amnesia. I do not like that trope. In my opinion, amnesia plots are overused and cliché. Yes, I’ve written a book that included one, and it made perfect sense at the time. I’ve since decided it’s not the best plot device.

I know Rick didn’t remember what happened to him while he was missing — heck, at first he thought it was the day after the car crash — but when he first woke up, he seemed entirely too flippant. He had to have read the despair and relief on Kate’s face, and yet he made jokes. I call that poor writing and/or directing. I also didn’t like Kate using his last name when she first approached his hospital bed. He’s her fiancée, for crying out loud. She should’ve called him Rick. I also don’t believe she should’ve left so soon to search for answers about his disappearance. I mean, he’d just waked up, and she leaves the hospital? Nope. No freaking way, not after he’d been gone without a trace for two long months. Too out of character for me to buy.

Espo came off as kind of a jerk during the search, too. His doubt and snide remarks really got under my skin. The twist concerning the two “Henrys” was a nice touch, however, and I like that we have more mystery to explore. Yet I’m still reeling from the wedding not happening at the end of last season and am irked Kate and Rick now have such a wide gulf between them. The last scene broke my heart. I do believe they’ll eventually get back on track, but the romance writer in me is rebelling at the unnecessary angst. Will they ever find true happiness?

I’m hoping we’ll at least get some resolution to Rick’s story in 7×2, Montreal. I still love the show, and I’ll keep watching. I just want Caskett happiness.

I wish I had something nice to say about this episode. Unfortunately, I don’t. I’m weary of the same old and tired story-lines, the same boilerplate scripts, the same character-types, the “coffee cup,” and, for goodness sake, I’m “up-to-here” with the kidnapping scenarios. It has become a real chore to keep up with whose turn it is to be abducted. I’ve tried keeping up with them by posting the information on a handy-dandy chart, but even that wasn’t much help. There’ve been far too many people-snatchings, especially when you combine the solo kidnappings with the group abductions. 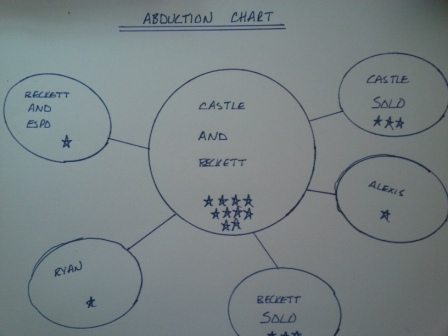 Adding to the same-old, same old, were the typical:

– searching places without a warrant.

– conducting searches and other police business in outside jurisdictions.

– taking control of investigations in outside jurisdictions

– the ever present FBI agent.

– the computer person who has access to every single surveillance camera in NYC.

– questioning a suspect AFTER he requested a lawyer (and twisting and tugging on the bad guy’s thumb while doing so).

– larger than life criminal who has access to DMV and other official records and files.

By the way, there was an odd thing going on in one scene. A police light bar flashed between red and blue, but it did so without an attached car, and only across Beckett’s chest. Anyone else catch it? 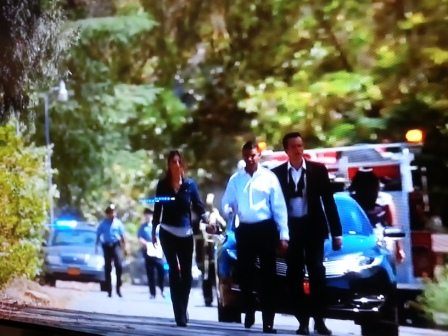 The blue light is visible in this photo. The next flash was red and it occurred over the right side of Beckett’s chest (her left). 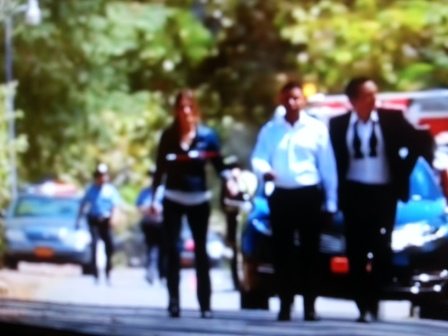 The alternating flashing lights stayed with her throughout the scene. It was probably a phenomenon caused by either Bigfoot, someone involved in the JFK assassination, or by a props department employee who mistakenly grabbed something from the set of one of those ghost-hunting TV shows.

So what did you think? Was the season opener all you hoped it would be? Or did it fall flat for you, too?

Followon TwitterSubscribeto RSS Feed
ExactID: Did You Leave Your Face On A Fast-Food Spork?