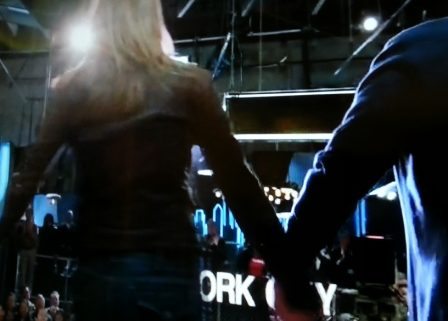 “I wanted to be a cop but ended up a writer. I know…pathetic.” ~ SNT Head Writer

The title Dead from New York, not “Live from New York” should tell anyone familiar with the iconic comedy show Saturday Night Live the premise of this week’s Castle episode, a fun romp across the stage of late night comedy that made me smile. I loved SNL back in the day, even though I rarely watch it now, and appreciate the Castle writers paying homage to it. It might have also been a dig of sorts, because Nathan Fillion has never been invited to appear on the show and some of his fans have launched a Facebook page, etc., to that end.

The Castle folks changed the name of the show to Saturday Night Tonight, a fact we learned right after one of the show’s creators fell into an elevator car. The poor man was dead as a doornail and covered in blood, “like a Jack-in-the-box from hell”, as Rick later put it, and was the catalyst for the crazy investigation that followed.

In my opinion, however, the case and its goofy red herrings paled in comparison to Martha’s turmoil over her first Broadway appearance in years. She was the best part of the episode, hands down, from her oft-repeated line, “Is he dead?” in the opening scene at the loft to her glee after reading the reviews of her preview performance on social media. I’ve loved Susan Sullivan ever since I watched her on Falcon Crest when I was a teen, and she just keeps getting better and better. I laughed out loud at some of her interpretations of the first line in her play. So funny.

I didn’t have much to blog about except for Martha, because Rick and Kate have adjusted well to married life and are in a good place right now. I adored Kate’s concern for Rick’s mother, who pretty much went of the rails about her upcoming performance and threatened to quit the play. Rick gave Martha a pep talk thanks to Kate’s intervention that brought her out of the doldrums and convinced her not to give up. I loved that scene. Rick and Kate’s little impromptu dance while watching Carly Rae Jenson sing also made me smile. His asking her to dance was apparently in the script, according to one of the Castle folks on Twitter, but Nathan and Stana ad-libbed the rest. So sweet.

The episode had plenty of laughs, including some courtesy of Jaleel White, but parts of it were downright silly. Still, I enjoyed the show as a whole and appreciated its lighthearted bent, especially after seeing the preview for next week’s season finale. I’ve heard that one gives us new insight into why Rick became a mystery writer in the first place, provides quite a conundrum for Kate career-wise, and leaves us with a cliffhanger. This gives me hope for at least one more shortened season. Fingers crossed. We should know for sure by Tuesday, May 12th, the date ABC is scheduled to announce their fall lineup.

What did you think about this week’s episode?

Like Melanie, I had very little to blog about unless, of course, I beat the dead horse (Lanie’s stupid lividity/time-of-death statement).

Actually, the show did a good job of self-identifying their police-type flaws—door-kicking while wearing high heels, the “Writer” vest, and Beckett’s not-so-much cop-like mannerisms. And let’s not forget the jogging app that came complete with a photo feature that zooms in on buildings where kidnap victims are held. Every cop should have access to that sort of technology.

How about the disco dance moves while in the midst of a murder investigation? Sure, every detective I know “busts a move” when they’re about to question someone.

I thought it was way out of character for Beckett to act like a silly teenager—batting her eyelashes and twirling her hair—when the faux TV star flirted with her. Totally not the role of strong female cop we’ve seen in the past. The scene, for me, was disappointing.

The episode this week was extremely light and basically without a case or a romance aspect. It was, well, just okay. In fact, the best part of the show was at the end when Beckett’s double took down the bad guy with a flying tackle—on live TV—followed by the classic SNT show-ending bows.

Writers’ Police Academy: My Mother Would Call It A Ministry
Scroll to top