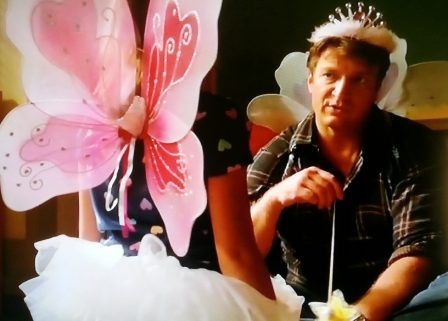 I wish I could say that Castle’s play-date costume was atypical of police work, but it’s not. Good detectives absolutely must know how to “walk the walk” and “talk the talk,” in whatever situation they encounter. They must be great actors, complete with a wardrobe that’s appropriate for the mission, and Castle really hit the nail on the head this week when he “suited up” and dove head first into a pit of untamed kid-monsters. Good timing, too, considering the horror stories in the news this week about kids attacking their teachers. How, though, did the rest of the show measure up? Was it as good as Castle’s classroom/fairy princess scene?

Let’s see what Melanie has to say about it. Melanie, the stage is all yours…

Another classic Castle episode. Yay! I loved it and believe it was the best of the season so far, although I would’ve enjoyed a little more PDA between Kate and Rick. The stellar writing kept my attention for the entire hour. Kate, of course, lost her gun twice in one fight, but even Lanie stayed on track with her lines. I can’t wait to find out what Lee thought about what she had to say.

I loved the family scene at the beginning. Gave us great insight into the dynamic in the Castle household these days and let us know Alexis was having a problem dealing with her dad’s disappearance. Her hovering kind of irked me, but I understood it. 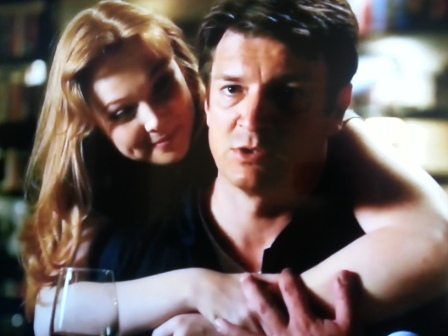 Unlike last week, the case grabbed me from the beginning… thanks to great writing and attention to detail. The blood spatter on the cabinet and the smear on the inside of the cabinet door were nice touches that made the story seem real. I love it when writers “get it right”. Kudos to Robert Hanning for doing his research.

Loved the parts involving the class of second graders, too. Rick was a natural with them once the teacher got a handle on the chaos. Crawling in the grass, playing army, and having a tea party like he probably used to do with Alexis. The child who played Emily, his tea party partner in the classroom, was an excellent little actress, as were the other kids with speaking parts. Great job! Rick totally rocked the fairy wings and tiara. And the marbles… ouch! Too funny.

One of my favorite parts was when Emily introduced herself to Kate, and Kate said she was Castle’s “friend.” Then Emily asked Kate if she liked to play “princess” with Rick. So funny and awkward. I laughed out loud.

Leave it to Rick to get kicked out of the school. The seamless writing made it seem so natural, I forgot all about the search for the key witness until he pulled the picture of the ice cream truck out of his pocket. Were you surprised to learn the victim’s boss was Jason’s sister… and that she was the witness they’d been searching for all along? I was, only because I’d forgotten about her. The rest of the show was just that good. I did, however, peg the kid with the camera as having an important role. Not only was he front and center in the classroom, but who carries a Polaroid camera around these days? Talk about a blatant clue. 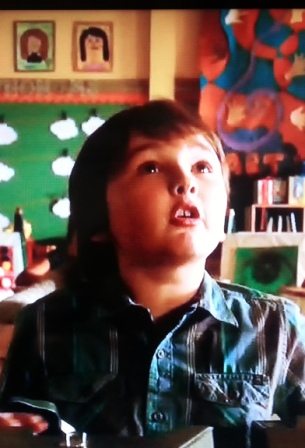 Still, all in all, I believe this episode was season seven’s best yet. Great little family moments, lots of humor, and a gripping case. Can’t wait for next week’s show!

There’s really not a lot of police fact/fiction to pick apart this week. Overall, the show was pretty darn good. In fact, even Lanie’s lines were good, and they were fairly accurate. Her comment about the gunshot residue/stippling on the victim’s shirt was believable, in spite of the makeup overkill. 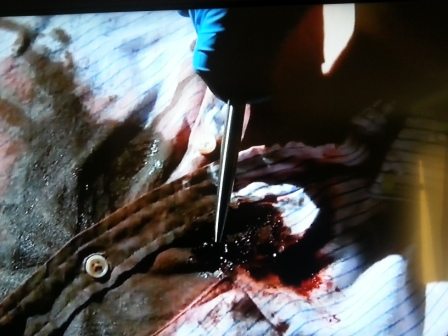 The same overkill with makeup showed up inside the ice cream truck. This time in the form of blood stain patterns and spatter. The amount of spatter inside the truck was a bit much and the pattern was far too broad considering the small amount space between the victim, shooter, and the cabinet doors where the spatter landed. 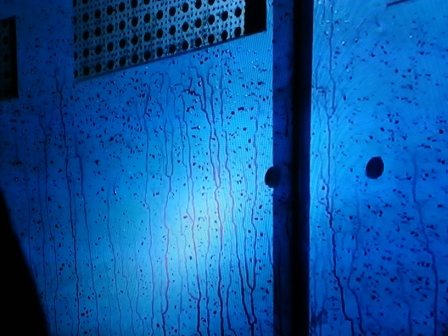 The spatter pattern on the cabinet doors was also slightly wrong for the angle of impact, unless the victim was seated or kneeling on the floor when he was shot. Blood droplets would present as elongated if they’d struck the cabinet at an angle, as if from a height greater than the cabinet—the victim’s chest/back. These, however, appeared to have struck the doors almost head on.

In other words, low cabinet height + head-on spatter = victim seated or kneeling. Of course, we must also consider how the shooter was positioned—standing or kneeling/seated.

Had the victim been standing the spatter would have landed higher up on the wall. UNLESS, the shooter was standing on a ladder. Of course, the angle of the droplets is all wrong for that particular scenario.

However, the droplet sizes were fairly accurate for those caused by high velocity impacts such as gunshots and explosions. High velocity droplets often range from small to a fine mist.

Still, this scene was far better than some from previous episodes where it looked like someone used a paint roller to apply “blood” to various surfaces.

Another nice touch was the evidence bag that had been sealed with evidence tape. I, like every other detective out there, have used miles of the stuff. 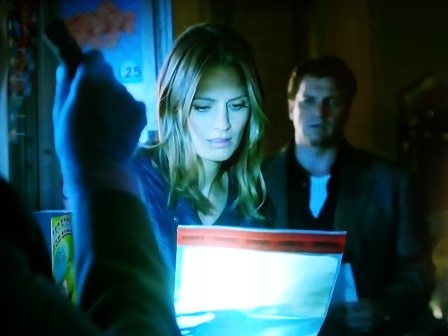 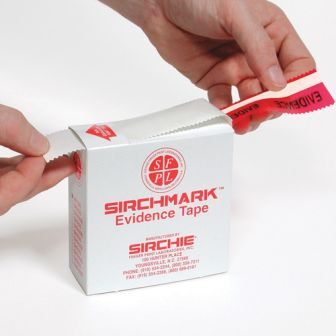 I enjoyed this episode. There was a nice balance between “the case” and the loving couple. It was fun, funny, and a great mix of fiction and realism all at once.

The icing on the cake was that it looks as if they’re finally on the right track as far as the police stuff goes. They still have a ways to go, though, like having Beckett stick with using the term BOLO (Be On The Lookout) as opposed to dropping the outdated APB (All Points Bulletin) bomb every now and again. She’s constantly back and forth between the two.

And, of course, the shoes…

Warning – Image is NSFPW (not suitable for police work) 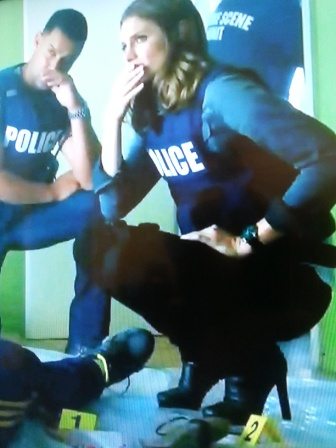