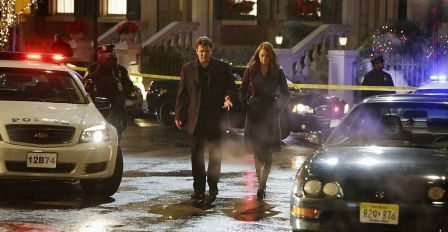 I wasn’t sure exactly what to expect after seeing promos for this episode. Bad Santa? A mob connection? Rick and Kate visiting a strip club in search of answers? Turned out I had nothing to worry about — and the strip club scene didn’t last too long. I loved the episode, even though I knew a big plot twist that would change the trajectory of the show for a while lurked at the end. The plot twist still took me by surprise.

The first scene with Kate, Martha, and Alexis at the loft made me giggle, mainly because of Kate’s incredulousness at Rick’s expectations about everybody coming up with a six-line holiday rhyme about the past year. Too funny. I especially loved Martha’s line, “Welcome to the family.” Oh, yeah. No telling what other odd Castle family traditions Kate has yet to unearth. I don’t see how life with Rick could ever be boring. Annoying at times, yes… but never boring.

The case of the man found murdered in a holiday display window moved along at a fast clip, with a lot of quirky turns that included Santa with a gun, a Romeo and Juliet-type love story, and enough lies to befuddle a saint. I wasn’t thrilled with the mob theme, but went along for the ride just for fun. Rick’s close involvement with the mob, mainly one mobster in particular, bothered me, however. Turned out it was for good reason, because once the DA got wind of Rick’s relationship with the mob boss, the world as we know it turned on its ear. Didn’t matter that he had helped to solve the case. A blood oath is a blood oath, apparently. Can’t jump in bed with mobsters and come out clean.

Spoiler alert! Stop reading if you haven’t seen the episode. If you have, you know I’m referring to the DA’s knee jerk reaction to Rick’s confluence with the mob. Unfortunately for him, the mayor agrees, and Captain Gates tells Rick he can longer work with the NYPD. This means he is no longer allowed to tag along with Kate. He doesn’t quite know how to tell her, especially in light of the cute little rhyming ditty she came up with for her holiday poem, and I’m sure she’ll be devastated… at least until the new twist promised in the January promo comes about. If you hung around long enough to find out what’s going to happen next, you know what I mean.

Rick as a licensed private investigator? Tee hee! What a great idea. I laughed out loud at that one. Looks like a fun episode. Can’t wait. I have it on good authority that he will eventually be allowed to return to the Twelfth, but not right away. I love the way the writers keep moving the story forward, keeping it fresh, while respecting story continuity (for the most part) and sticking with canon. I love this show.

This episode left me nearly speechless, simply because there weren’t too many flaws in the procedure and other cop-type stuff.  So I had very little to do other than watch the show.

Of course, Lanie was still Lanie, but not quite as voodooish. Showing the personal side of her character this week was a nice touch, actually. The actor seems so much more open and comfortable when she’s not in her M.E. role, where she’s stiff and unnatural, much like the dead folks who hang out in her morgue.

The major faux pas this week, though, was how easily Beckett and crew located evidence at the crime scene—the bloody bracelet and a completely intact bullet embedded in concrete.

Speaking of that unspoiled round, here’s a photo I took at a firing range to show what really happens when bullets strike hard surfaces head-on.

So that’s it in a nutshell. If I had to assign a grade to this episode, well, it was just middle of the road for me…a C.

Add that to Melanie’s “A” and the show gets a B.

Followon TwitterSubscribeto RSS Feed
Sorry, But To Protect And Serve Does Not Include Taking A Bullet For You