“Safety first.” ~ Castle, as he slips on a helmet before joining Beckett in bed.

What a perfect title for last night’s show (which I hated, BTW), because ABC has just stabbed Castle fans in the back with their refusal to re-up Stana Katic’s and Tamala Jones’ contracts for season 9 to make a different version of the show. Stana did not deserve this.

I’ve never liked Hayley (no offense to the actress who plays her), and I despise what Terrance Paul Winter and Alexi Hawley have done to my former favorite show. And NO, I will not watch Castle in its new form. I simply can’t, because Castle just isn’t the same without the Caskett romance. I’ve hated season eight for that reason. Fans are up in arms and have taken to social media in a big way to protest this fiasco. I hope ABC loses tons of money on this stupid idea and decides to cancel the show instead of mutilating it more than they already have. Just remembering the trash they’ve given us this season makes me sick to my stomach.

I had trouble watching this episode, because watching what they’ve done to this show simply hurt way too much. I’ve loved Castle since day one because of the romance between Kate and Rick. The two characters had so much chemistry. The writing was excellent (in the first six or so seasons, anyway), and the writers gave us plenty of laughs. They hooked me right away, and I couldn’t stop watching. I’ve bought all the DVDs and the Rick Castle books and read tons of fanfiction over the years. Sure, I’ve occasionally not liked an episode or two and I absolutely hated Kate’s stint in DC, the end of season six, with the aborted wedding, and the stupid reason they came up with for Rick’s disappearance, but I still love the characters and wish the show could go on in its original incarnation with the great writing it had in its early years.

I may not blog again after this because I’m not sure I can. And I doubt I’ll watch the season eight finale, because I simply cannot watch Kate Beckett die. No way, no how. The Rick Castle that I know could not go on without her, and he certainly wouldn’t be yukking it up with Alexis and Hayley as Castle P.I. after her death. That’s just wrong on so many levels.

I’m extremely hurt and disappointed in ABC and the current showrunners. How could they do such a wonderful show? WHY did they do this? <sob>

I’ve enjoyed blogging with Lee to critique this show. It’s been a fun ride. We plan to find a new show to critique eventually, so stay tuned to see what happens next. I just know I can’t do this anymore. My thanks to the cast and crew for a fabulous show (before the current people ruined it). I appreciate all your hard work and the time you committed to this project.

So goodbye, Castle, because the show just won’t be the say without the Caskett romance. My love to Rick and Kate.

Before I begin with my portion of the review I feel that I should address the recent news regarding the non-return of Stana Katic and Tamala Parish in season 9, if there is a season 9, that is. If the show is renewed, and I think it will be, I believe we could ultimately see the “Castle, Alexis, and Hayley PI Show” in the slot next year. (Alexis told Hayley just last night that she’ll never have to face anything alone again).

Unfortunately, Castle has become a total and complete train wreck that has driven many viewers nearly to the point of leaping off cliffs, self-mutilation, and sheer madness. Therefore, booting Beckett from the lineup was not a surprise. Nothing that happens on this show surprises me, actually.

However, I wouldn’t bank on the news that Katic was fired. I’m pretty sure it was a mutual split, one that was one announced this early as a means to entice viewers to watch her final episodes, and to stir enough fire that’ll make viewers want return to see what happens next year.

Jones, well, the Lanie character was nothing more than a distraction. She could’ve been a great asset to the show, but the writers chose to make her more of a babbling voodooish witch doctor than she was a medical examiner. I do sincerely wish Tamala all the best in future roles. She’s certainly an actor who deserves far more than she was given in this series, and I look forward to seeing her in roles that showcase her talent instead of the ineptness of clunky writing. And that brings us to the usual crappy stuff they wrote for her this week. Starting with Lanie saying…

“Victim took his right between his T4 and T5 vertebrae. Severed his spinal cord. Died instantly.”

Okay, you all saw the dead guy on the floor, right? If you didn’t happen to notice because you were too busy sticking a finger down your throat hoping to purge this garbage from your system, he was the actor with the knife jammed into his back, a knife that penetrated the guy’s leather jacket and shirt beneath. This guy… 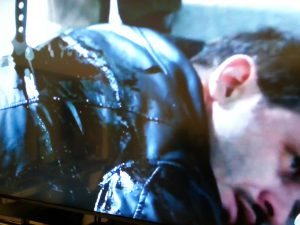 I know you guys aren’t trained medical examiners, or detectives, but I think it’s fairly safe to assume that most of you have spinal cords and vertebrae. So, you tell me (based on looking at the dead guy in the above photo) exactly where in the back is the knife lodged? Do you, like Lanie, possess the unbelievable ability of X-ray vision and can see through leather? Are you somehow magically able see his spine? Is the expression on his face one that tells you he died instantly?

Now, compare the two images and tell me how in the heck would/could anyone, especially a woman of science, be able to tell the knife was precisely embedded between between the thoracic vertebrae T4 and T5.

The victim is fully clothed. You can’t even see his skin. For all we, and Lanie, know, the knife could be fake, or the blade is curved and didn’t so much as cause a scratch. The man could’ve been shot, had a cardiac event, or even died as a result of being hit with a copy of Stephen King’s book, Under the Dome (have you seen the size of that book?). There is no freakin’ way to positively determine anything from looking at this fully-clothed body. Well, other than the fact that he is indeed dead. By the way, for a dead guy who’s been there for several hours, his skin tone looks pretty darn good.

Oh yeah, the above goes for the killer, too. How could he have shoved a knife into the guy’s back at the precise point between T4 and T5. Yep, this one pops the top on the bulls**t scale.

And then there’s Hayley. The writers must’ve copied and pasted some stuff from an old script that featured Beckett saying she had to leave/disappear because her presence might be putting everyone in danger. Again with the worldwide gloom and doom scenarios. Are these the only plot lines Castle writers know how to scribble these days?

Hayley, a person with a shady past who’s been known to lie and do “things,” roughed up a suspect/witness in the precinct bathroom, an act that caused the guy to spill some beans. In other words, she, who’s sort of an agent of the police (which is totally unbelievable, by the way), tortured a man until he told her what she wanted to hear. And then the police used that information to help their case. Illegal and immoral. Cops aren’t allowed to do that to people. And they certainly can’t condone the tactic when used by people who’re acting as their agent(s).

Throughout this episode, Hayely, a murder suspect, is allowed to assist the police in the investigation into her involvement, and she’s allowed to do so while ARMED. She was also permitted to handle evidence. The tiniest insect crawling across my backyard would probably know this concept was STUPID. Cops do not allow murder suspects to accompany them and assist, while armed, as they investigate the crime in which they believe her to be involved.

The FBI, one the best law enforcement agencies in the world, one with all the resources one could imagine, was searching for Hayley. They had an active arrest warrant. A warrant for a crime of terrorism. Yet we never saw them and they couldn’t find Hayley, who was everywhere in this episode. And, Beckett and crew offered to help conceal her whereabouts instead of arresting her. That, my friends is obstruction of justice which is punishable by several years in federal prison.

Beckett said, “…tricked by a woman named Carla into gaining access to a building and a secured server, most likely to help Marcus (the dead guy) rob the place. I’ve said this many times on this blog, and i’ll say it again for the benefit of newcomers to this site. A place cannot be robbed.

But don’t feel bad because many people confuse the terms robbery and burglary. I see the misuse of those two terms everywhere, including in books written by some of my favorite authors. I also hear the terms interchanged on TV and radio news. They are not the same, not even close.

The only robbery that occurred in this episode was committed by the show’s writers who robbed us of an hour of our lives that we can never get back. Boom! Mic drop…