Inmate J.L. Bird, #12345-678, had always enjoyed living in California. The scenery was absolutely to die for, and the Mexican cuisine was, without a doubt, the best in the country. Somehow, though, the view didn’t quite seem the same when seeing it through windows covered in heavy metal mesh.

The Marshal had been driving about two hours when Bird reached into his paper sack and pulled out one of the boiled eggs. He gave it a couple of gentle whacks against the aluminum seat back in front of him and then began the tedious process of picking away the shell one small fleck at a time. After a quick inspection to be certain he’d removed all traces of the outer covering, he devoured the egg in two bites. The second one, though, he decided to savor, nibbling at it and letting his tongue enjoy the creamy texture of the yolk. Besides, who knew when the next meal would come.

The inmate seated next to him on his left, a man whose exposed flesh was mostly covered in jailhouse tats, slept soundly. His shaved head lolled from shoulder to shoulder depending on the direction of curves and varying depths of potholes. A bluish-black cobra adorned the back of his head, and the words “You Die” were inked across his forehead in large block letters.

The man directly in front of him wore his hair in long dreadlocks that he’d gathered into ponytail by using a series of bright pink rubber bands. Next to him sat the fattest man Bird had ever seen in prison khaki. His breathing was loud and wheezy and each exhale produced a faint whistle. His nerdish-cut greasy hair was the perfect compliment to the three-day growth of deep black whiskers covering his cheeks and upper neck.

Bird passed the time by thinking about how wonderful it would be to stand outside in the midst of the almond orchard they’d just passed. Or to feel the sunshine on his arms and face while tending to the dairy cows at the massive farm he’d seen back near Barstow.

After traveling through a very long stretch of nothingness followed by desert as far as the eye could see, the driver finally slowed and turned left into what appeared to be an abandoned airport. She pulled over next to a dilapidated tin shed and asked if any of the prisoners needed to use the restroom.

Bird waited his turn as the Marshals let them out two at a time to expel their water right there on the asphalt. The female marshal was nice enough to look the other way while her male partner stood watch over the tinklers.

Twelve men later, and a nice-sized S-shaped river that disappeared beneath the van, the side door was closed and padlocked, and the driver headed straight for a cracked runway with tall, dry weeds sprouting through the jagged openings. She hooked a left after passing a series of rundown metal buildings of varying sizes. And that’s when Bird first saw the menagerie of sheriff’s vans and buses, prison vehicles, and an array of heavily-armed officers from various agencies. A couple of snipers stood on roof of an old hanger, and several sunglass-wearing BOP (Federal Bureau of Prisons) officers stood on the asphalt pavement. They each held a long gun of some sort—pump shotgun or military-style rifle. Those guys were not there to play games. No sir.

“Where are we?” Bird asked the female Marshal.

“My guess would be an airport,” she said, and looked to her partner who politely chuckled at her weak attempt at humor.

“You know we can’t tell you that, Bird,” said the male Marshal. “Obviously, you’re going to take a little trip. So just sit there and be quiet. You’ll find out where you’re going when you get there.”

Bird leaned back in his seat. Fat Guy was fidgeting in his seat and sweating profusely, and his breathing whistles had grown louder and higher-pitched, almost to the point of “only dogs can hear.” He toyed with the black box mounted between his cuffs. Bird wondered what he’d done to warrant the added security.

Movement on the runway caught Bird’s eye. The officers outside began to assemble into a somewhat orderly formation. They were also watching the sky. Something was about to happen…and it did. A dot appeared above the horizon and, within a matter of seconds, it grew into a large passenger jet.

The plane made its approach and touched down smoothly, stirring up clouds of dust and sending a half-dozen tumbleweeds rolling off into the desert. The massive unmarked jet came to a stop in front of the officers. The roar from its engines was uncomfortably loud. 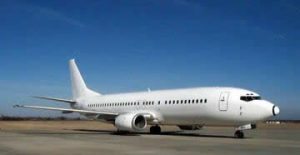 A rear stairway lowered to the ground and a handful of jump-boot-wearing marshals filed out. They spoke with the group of ground transport Marshals, deputies, and other officers, and then motioned to the driver in control of Bird’s van, who eased the vehicle forward until it was within a few yards of the plane. She and her partner opened the side door to the van and told the prisoners to step outside and line up, single file. A second door on the jet opened. This one was on the side, and a set of stairs lowered until it, too, touched the pavement. 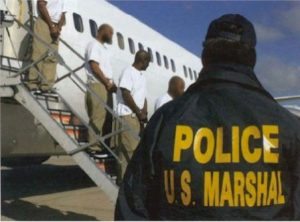 As the buses and vans unloaded their human cargo, a steady stream of t-shirt and khaki-wearing prisoners made their way down the jet’s side stairs. As soon as their blue-shoed feet hit the pavement they were whisked away by the officers who were there to take them to their new home for the next 5-10 years, or longer. Some, like Bird, were on their way to court where they’d testify against co-defendants or to listen as their court-appointed attorneys pleaded for sentence reductions or new trials, or for whatever legal business warranted a flight on the Marshals’ mass transit system. 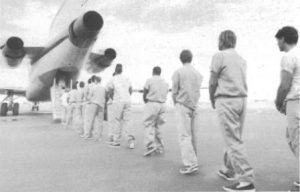 After comparing papers and photo ID’s, Bird’s group was loaded into the jet via the rear stairway, where Marshals guided them into seats that had seen their better days many years ago. 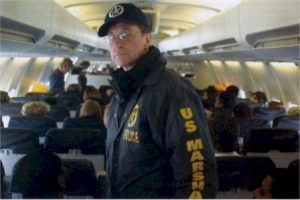 The interior of the plane was hot and the little moveable air nozzles either didn’t work or were missing. The seat trays had been removed and the carpeting was stained and sticky. Many years of accumulated artificial fruit juice, piss, and vomit, Bird surmised. The aroma of pine cleaner did nothing to hide the stench. He wondered how the Marshals stood being cooped up inside the funky-smelling jet day in and day out.

Within a few minutes they were taxiing down the runway, headed for who knew where. As soon as they reached their cruising altitude the pilot made a brief announcement. “You must remain in your seats at all times. You may not stand for any reason. You may not use the restroom during the flight. The air marshals on board are not flight attendants. They are here to insure my safety and yours. You will follow their instructions at all times. If you have any questions, please hold them until we land. Until then, thank you for flying Con Air. Enjoy your flight.” Only the Marshals laughed at the pilot’s attempt at comedy.

Bird closed his eyes, hoping to sleep the day away. But the nose-whistling fat guy wasn’t about to let that happen. He stood and began screaming some sort of gibberish about being terrified of flying and that he was going to kill the pilot. Well, it took all of four minutes and five air Marshals, a Taser, and a few well-placed blows to the head, shoulders, and lower back to silence that nonsense.

Bird closed his eyes again, hoping the steady hum of the jet engines would help him sleep and send him to freedom, if only for a few hours. Soon he was dreaming of life on the outside. Ah, to be at the coast once again…