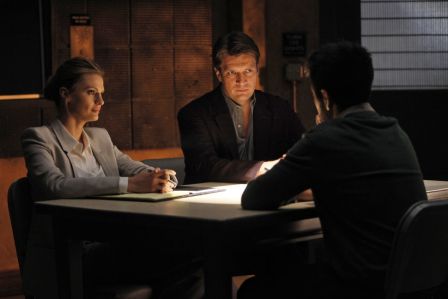 Finally, Castle and crew were back together again for this week’s episode, and they were where they should be, at the NYPD. The show was a mixture of fun, surprises, and who knew Esposito would be a Dr. Who fan? The chemistry was there as were Castle’s snappy one-liners and boyish humor and imagination. Beckett was back in charge, tough, and a touch on the gritty side. Overall, this was a really good episode.

Let’s see what Melanie has to say about this one.

Loved this episode of Castle almost as I did the one last week, even though it had a different flavor. The Back to the Future storyline was a little out there, yes… but it flowed seamlessly and kept my interest, Lanie had good lines, and we only had to endure Pi in one tiny scene. That alone made the show tops in my book. I’m ready for that fruitcake to beam himself to Mars.

My favorite parts, as usual, were the family moments between Rick and Alexis and Rick and Kate. I also loved the message from the future for our dynamic duo… along with Kate’s shy smile and Rick’s delighted grin. The man mentioned they married and had three kids, and neither of them freaked out? They are definitely making progress.

After the usual body drop at the beginning of the show, Rick’s painful meet-up with the belt Pi left on the living room floor led to a unpleasant confrontation with Alexis. Rick told her Pi had to go, and she basically said, “No problem. We’re moving out.” Rick, of course, had a cow. He did his best to talk her out of it, even suggesting she move back into the dorm and give her relationship with Pi a year to see what happened between them. Alexis politely declined.

Rick’s sadness over his daughter’s defection broke my heart, but he had to know she would move out sooner or later. He just wanted it to happen later. Much later. In wifely fashion, Kate did her best to soothe his fears and reassure him he still had milestones to go with Alexis, plus special times for him and Kate as a couple. He agreed but was still dejected about his daughter shacking up with the fruitarian. I don’t blame him, but like Alexis said, she is nineteen. Letting go is hard. I’m glad Rick has Kate to help him through it.

The circuitous plot intrigued me. Even the title, Time Will Tell, speaks of Rick and Kate’s relationship. Will they really marry and have three kids? Only time will tell. Get it?

I thought the story was well written and fun and wasn’t surprised to learn series creator and showrunner Andrew Marlowe and his wife Terri Edda Miller wrote it. I always love their episodes. Best. Show. Ever. I could watch Castle every day.

By the looks of the promo, next week’s show has a Di Vinci Code vibe. Another unusual plot, and more of Rick’s fascination with the oddities of life. Nathan nails it every time.

First of all, the show works best when Beckett is the woman in charge while she’s at work, because that’s what she does best. Solving murders and leading “the team” is her thing. Then, when she and Castle are on their own time, Beckett lets down her guard and her vulnerable side begins to appear. Castle…well, he’s a big kid who just happens to be good at solving crimes and is always vulnerable for a bashing of his emotions.

This is a show that doesn’t need gimmicks to maintain high ratings. Castle fans don’t need sloppy, silly detectives who eat junk food nonstop. And they don’t need obnoxious boyfriends for Alexis. Just give the audience a decent story/plot, some humor, and a bit of goo-goo eyes and touchy-feely-kissy moments between Castle and Beckett, and they’re good to go. In other words, Castle fans want and deserve the Castle they all know and love. This week, that’s what they got.

Next, the case this week was believable. Yes, there are people out there, and cops deal with them every day, who’re from Mars or Venus, or they’re John Lennon or JFK reincarnated. Maybe they’re the little man in the refrigerator who operates the switch for the light that comes on when you open the door. Whatever the case may be, these people are out there and they roam our streets searching for their next ride to the planet du jour. So, yes, the man-from-the-future plot was totally believable.

Even my dear old buddy Lanie was in top form last night. Jones delivered her lines perfectly, and her character was believable. I nearly jumped out of my chair when she said she’d have to get the body back to her office before she could come up with a time of death (TOD). Good line and believable.

Although, the lipstick/blacklist thing was a little wacky. How’d she know the spots on the victim’s neck were lipstick? No testing had been performed. Although, there are brands of fluorescent lipstick and other makeup products out there that do indeed glow brightly when exposed to black light. I guess it’s supposed to be a cool thing in nightclubs. Who knows, maybe Lanie dresses up and parties hard after a long day of slicing and dicing bodies.

– The victim du jour received a viscous slash to the throat, and she was electrocuted. Beckett seemed to believe the victim’s killer was a woman (due to the lipstick/kisses on the neck). As a rule, female killers do not torture or kill their victims in “up close and personal” and violent means. Normally, when a woman kills she prefers to do so from a distance, such as poisoning or with a firearm. Or, by hiring someone to do the job for her. Males are the sloppy killers who don’t mind a little blood on their hands, and perhaps a struggle with the victim. A detective’s gut feeling and past experience should have had Beckett keeping the possibility of a female killer on the back burner.

– Finally, after all these years, Beckett used the acronym BOLO (Be On The Lookout) instead of the dated and rarely, if ever used, APB (All Points Bulletin). First Lanie and now this. Hmm…Maybe someone’s reading this blog????

– The prostitute’s “manager” told Beckett that he had a former “cellie,” Garrett Ward, who could be good for the murder. Great touch of realism here, since cellie is a term that’s actually used by inmates when referring to the prisoners who share their prison or jail cells.

– Beckett and Castle head into an abandoned power plant to search for the ruthless and brutal killer, Garrett Ward. First of all, this search should have been conducted by a team of officers, not by a lone detective and her unarmed writer boyfriend. And, as usual, Beckett is surprised by the bad guy who promptly knocks her unconscious. Did she lose grip on her gun, even if only for brief time during the thug-induced blackout? Probably so.

So Castle, jumps on the behemoth’s back in a Curly-esque (Three Stooges) move, but the tables are quickly turned, leaving Castle against a wall with the killer’s hands around his neck in a deadly choke. But he’s saved from death by the appearance of little Simon Doyle (Joshua Gomez, formerly of NBC’s Chuck, and the Beatlemania tour where he played George Harrsion).

Of course, Beckett is only out for a few seconds but recovers without even the teeniest bit of grogginess or even a single strand of hair out of place (see yesterday’s blog post about blows to the head). She also managed to come up with her weapon pointing at Doyle.

– I did find it odd that the professor’s wife didn’t seem at all disturbed by the fact that her husband had just been brutally killed right before her eyes. But, people grief in different ways.

Okay, as you’ve seen, there was not a lot of police procedure to pick apart, and what was there was probably the best I’ve seen on this show since day one (yes, including Lanie). The thing I found most impressive was that the case actually unfolded in a way that’s quite similar to a real life case. There were no goofy red herrings. In fact, we all knew the killer’s identity early on and Beckett and crew pursued him ruthlessly, as any good detective should.

So yes, I enjoyed this episode, and I’m happy to say…THEY’RE BACK!

Still, Pi’s absolutely got to go…